The future of fandom disrupted

If there is one skill that successful business people — from highly profitable entrepreneurs to the savviest investors — have in common, it’s the ability to anticipate.

It’s the ultimate power, not just because the world is an ever-changing place, but because the drivers of change in the world are constantly evolving. Being able to wade outside the current and see not just what’s coming around the bend, but understanding why is the key to staying on top of your competition both in business and investing.

I believe so strongly in the importance of anticipation that it stands at the core of every significant business decision I make. In fact, it was a big reason I made the move to become one of the owners of the MLS (Major League Soccer) expansion team, the Los Angeles Football Club. I went in with a group of like-minded investors, including my dear friend Peter Guber — who also owns the Golden State Warriors and LA Dodgers, and who ranks No. 10 on Worth’s 60 Most Powerful People in Sports list.

Why Peter Guber and I invested in LAFC

The data certainly supports soccer’s status as much more than an international one-trick phenomenon. But what am I anticipating here? The popularity of a single sport? As an investor, that’s just a blip on the radar when you look at the broader implications. There is a far bigger trend occurring in the world of sports that those with strong business vision will capitalize on, and quickly.

The shifts I’m alluding to affect you whether you’re a sports fan, or maybe you’re thinking of investing in ownership of sports team, or even if you have no interest in sports whatsoever but you’re an educated business mind who wants to understand how technology is changing one industry, so that you can capitalize on how those changes may affect your business and your personal investments.

1. Social media has magnified the connection between fans and performers

That’s right—performers. The value of professional athletes is one hundred percent connected to their ability to draw a crowd. It certainly could be because of sheer athletic ability and fierce competitive drive, but today, it can also come from charisma and personality in and outside the lines all because social media has removed the filter. Consider the athletes who pack stadiums and grab headlines, entertainers like LeBron James, Serena Williams, Maria Sharapova, Floyd Mayweather Jr., David Beckham and Stephen Curry. Before social media, information about athletes was limited to the surface—what you saw in a game, read in a magazine, or heard in a TV interview. There were barriers to their real-life selves, much like politicians today.

But now athletes can express their thoughts, feelings, workouts, sneakers, playlists and messages directly to the world. Now you can tweet at Steph Curry and he just might tweet you back. You can go on Instagram and see exactly what Serena Williams ate for breakfast before a match. You can watch LA Dodgers pre-season practice clips on Snapchat. Fans have an entirely new way of connecting to their favorite players, and it’s far more interactive—and deeply personal—than ever before, which ups the level of enthusiasm for sporting events because it injects emotion into the entire experience.

I’ve long taught that information that is not attached to emotion is not retained. We’re drowning in information. Information falls through the sieve of our saturated minds. Emotion is what sticks with us. Sports without emotion would just be more information. But give us Steph Curry, and his dad Dell, and those flashy Under Armour sneaks, and his high-school-sweetheart wife, and their adorable daughter Riley taking over the finals press conference, and the Cinderella story out of Davidson, and the GQ photo shoot, and the fact that he’s only 6’3″, and the way he drains those deep threes—how can you not get excited about this guy? He truly loves the game and he’s a genuinely nice guy. That’s the power of coupling emotion with information, and that is what sports is able to tap into today.

2. The rise of digital group viewing

Because sports fans are tribal by nature— think Red Sox Nation—they want access not just to the athletes, but also to other fans. This is another reason why social media has been such a match in the gas tank of soccer’s fanatics, and that’s why the second big trend is digital group viewing. For instance, Facebook, along with other tech giants, is vying to buy the rights to stream Thursday Night Football on its platform. A Facebook NFL game would be an entire social experience, connecting viewers from all over the world.

But innovations in social media are not what will ultimately drive the most dramatic shift coming down the pike. The third and most powerful trend is something entirely new that is about to disrupt athletics and entertainment viewership as we know it. This is the new gold rush.

3. Virtual reality and bringing the fans to the action

So how will virtual reality do it? It’s all about taking the emotion of the consumers (sports fans) and linking it to a unique direct experience (a view of the big game that most would never ever get).

I’ll never forget the first time I tried it.

My reaction wasn’t quite as dramatic as that viral video of grandma on the virtual reality rollercoaster, but I was just as astonished by what I saw when I put that white Next VR headset on. 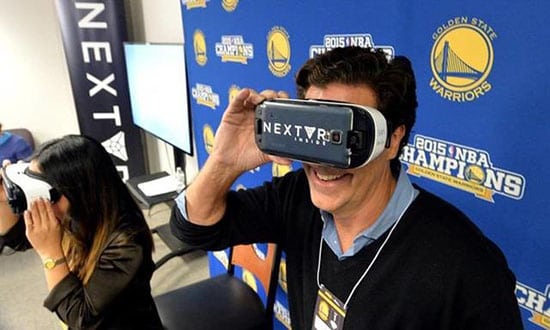 It happened because Peter Guber called me up and said Tony, you’ve got to come here and see this. See what? I asked. I was in London giving a seminar. He said, Just trust me, man, it’s like nothing you’ve ever seen in your life. All you’re going to be able to say is, Oh my god, Oh my god. So, I flew to LA, sat down with Peter, and he put the Next VR headset on me. And like clockwork, the first words out of my mouth were, Oh my god, Oh my god.

Peter showed me a Warriors game through headset, and even though I had attended the Warriors’ finals and sat courtside with Peter, his device was on-par with the sensory assault. I couldn’t believe it. I’m a paint-on-the-wall kind of guy – I like to touch everything, I want to feel it. That’s why I love live seminars with my own audience, because writing a book or an article feels like someone has tied my hands behind my back. But this headset lets you look up, down and all around. I was sitting in Peter’s office, but Steph Curry was right in front of me in 3-D. I felt like I could reach out and touch him. I still flinched at the chest pass in my direction that felt like it was sailing right at my face. It’s wild. If you’ve ever put one on, you know what I’m talking about.

NextVR is the leader in live-action virtual reality broadcast technology. It developed a way to deliver live and on-demand virtual reality experiences, as long as you have a smartphone and a VR device, you’ll be able to watch any live sporting event you want from the angle you choose. You won’t be watching from the nosebleeds or the best you can afford on StubHub, you will be watching from the front row… or courtside. Or mid-field. Or on the 50-yard line. Or behind homeplate. Or the third-base box. Or on top of the left field wall. The stadium is your playground. We as consumers will have the choice to switch camera positions, to opt in or out of a produced feed with graphics, or to select just the raw game, naked-eye view. We can listen to either the home or away team announcer. How’s that for adding more value to your clients?

Remember: Success in business is all about falling in love with your clients (not your product or service), and finding a way to add more value for them. Make them raving fans.

Peter Guber and I are both investors in NextVR. I asked Dave Cole, one of the founders, about what this means for the sports industry—and for the millions, or rather, billions, of sports fans in the world. He told me that the vast majority of sports fans will never step foot into the stadium or arena.

“How can that be possible?” I asked. “If you’re a true fan, don’t you go to the games, even if you can’t afford the best seats in the house?” Dave agreed, but NextVR will change that. The undeniable value that virtual reality brings, something that nothing else so far has been able to deliver to customers, is the sensory experience—seeing and hearing as if you’re there. And get this—they’re already working with haptic-touch technology and electronic muscle simulators that effectively trick your body into feeling vibrations, pressure and other tactile sensations. As if transporting you to another world was not enough.

NextVR is now broadcasting live to anyone with a virtual reality headset. They’ve delivered everything from the NBA, the Masters, the NHL, boxing, NASCAR, Wimbleton, the International Champions Cup and NCAA March Madness, just to name a few.

Fans are going crazy over it. By the end of 2016, NextVR was projected to already have between 15 and 25 million users. Because they have anticipated an enormous opportunity in the marketplace and strategically innovated to meet consumers’ needs in a way that no one else ever has, their business was set to grow geometrically in a very short period of time. Think about it; before, you could only sell a seat to one human, now, they have an ability to sell the same great seat to as many humans as there are VR headsets — the profitability, scale and fan satisfaction is off the charts.

This example is the epitome of the lesson I impart to all of my business coaching clients. You’ve got to know what business you’re really in (e.g., you’re not in the basketball business, you’re in the entertainment business). Then, and as you fall in love with your clients and cater to the business you’re really in, you simultaneously cultivate and grow the business you need to become to stay relevant and add even more value to your clients and customers.

This is the future of sports. How will you leverage this technology in your business, or for your own investment gains?

What motivates people to work

How to keep your customers happy

The customer is not always right