Home » A path to forgiveness

A path to forgiveness

For the vast majority of us, forgiveness doesn’t always come easily. We may say “It’s OK” when we perceive someone has wronged us, then dwell on that wrong. We remain angry at the person we believe slighted us. We dream up reasons for why they did what they did. Even if we do forgive them for what they’ve done, we will likely hold on to our anger over why they did it. This subconsciously twists our image of that person; we are telling ourselves a story about them, and in doing so we’re ingraining those beliefs in ourselves. The stories we tell about ourselves control the way we live and react to challenges – and the darker the tale, the darker your outlook.

That is why we must separate forgiveness from blame. Yes, perhaps someone hurt you in the heat of the moment. But haven’t you done that, too? Next time you’re angry at someone and blaming them for how they hurt you, think about how you’ve reacted to people when you are hurt, angry, tired or confused. You probably didn’t come off well either, did you?

When you embrace a path to forgiveness, you’re also forgiving yourself for thinking poorly of them. You’re giving yourself permission to feel and be human (after all, our brains are wired to expect the worst!), but also acknowledging that your knee-jerk emotions aren’t always the truth.

True forgiveness has a companion: gratitude. To truly live an extraordinary life, give thanks for everything that has happened in your life – yes, even the bad things. If your life always went according to plan, you wouldn’t grow much as a person, would you? Every challenge you face contributes to the person you want to be.

If someone wrongs you, forgive them. More than that, forgive yourself – and be grateful that you have this opportunity to examine your own thoughts and feelings on the matter. It’s how you grow as an individual. This is what the story from Genesis of Joseph and his 11 brothers is all about.

The story of Joseph

Tolstoy called it “the most beautiful story in the world.” It’s a tale of true forgiveness, and one of finding the higher meaning in difficult or even tragic life events.In this episode, you’ll hear Sage Robbins interview Stephen Mitchell, author of Joseph and the Way of Forgiveness, Stephen’s vivid reimagination of the classic Biblical story.

In Genesis, Joseph is an egotistical brat whose brothers plot his demise. But instead of becoming a victim, Joseph finds a path to forgiveness. He has an awakening to the higher purpose of it all. He begins to see his brothers as being sent by God to help him develop spiritually. He journeys from a place of victimhood to a place of empowerment. He’s literally transformed from being enslaved to being the right hand of the pharaoh of Egypt. And when the opportunity for vengeance comes, he doesn’t take it. He has reached the understanding that everything is meant to happen.

Humans have always told each other stories; before we had law codes or schools, stories were how we transmitted information about our values and the meaning of life. Stephen realized that the story of Joseph – as it appears in the Bible – was extremely compressed, with plenty of areas he could expand upon to develop it into a richer, even more captivating lesson on forgiveness. The Robbins family was deeply touched by Stephen’s work; they took turns reading chapters aloud to one another while gathered around the fireplace. 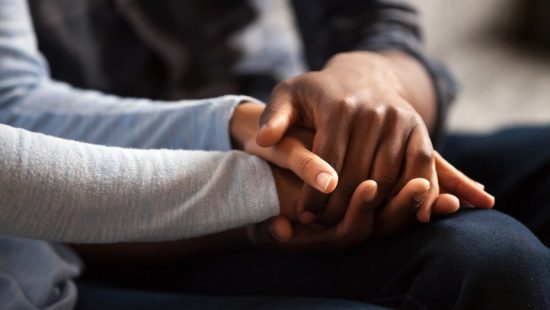 The true meaning of forgiveness

In the conversation, Stephen discusses forgiveness and how modern society has largely lost track of how to truly practice it. We are consumed by the need to cast blame, to offer forgiveness as a magnanimous gesture instead of a representation of our own enlightenment. It’s almost like a competition. We want to prove that we are better than the other person – that we don’t need them. But this isn’t true forgiveness.

The core message of this story is still deeply relevant today. Together Sage and Stephen explore how to best interpret this message through meditation as well as the application of the inquiry work of Stephen’s wife, Byron Katie. They discuss the path to forgiveness and process of enlightenment not as things to be achieved, but as a way of life.

Most enlightenment experiences are short term: days, hours, weeks. Rarely is it a complete transformation. The ordinary consciousness eventually returns – and along with it the state of suffering. We think that we have achieved enlightenment, but we have only experienced a small fraction of it. As Sage realized, it isn’t even a thing to be achieved, a state to be attained. It is a part of every breath you take, every moment of your life. When your gratitude lasts throughout the day, months and years and you no longer feel anger or sadness, that is enlightenment.

Do you want to live in this beautiful state? Listen to the podcast to learn more about how to embrace forgiveness and reach enlightenment.

[0:43] Tony introduces Stephen Mitchell and his work
[2:07] Joseph’s story is about the deeper meaning of forgiveness
[2:50] Joseph sees those who harm him as sent by God to help him develop spiritually
[3:30] Joseph has the chance for vengeance but doesn’t take it
[4:22] Stories are how we have passed down values and meaning
[5:25] Our brain is designed to look for what’s wrong
[5:58] Stephen reads sections of the book
[6:44] We can learn from our suffering
[7:20] We never had control in the first place
[8:50] Joseph rises in the ranks in his new household
[9:05] People sensed wisdom and love in Joseph
[9:40] “The unnamable” is the most valuable thing in human life
[11:00] A Zen master asks, “Where have you come from?”
[11:14] What is spiritual light compared to other kinds of light?
[11:35] Wisdom is a mode of love
[12:17] The highest intelligence of human beings is insignificant next to natural intelligence
[13:55] Sage reveals that the family read the book aloud to each other
[14:24] Joseph and his brothers has been Stephen’s favorite story all his life
[15:01] The version of the story we have is extremely compressed
[16:01] Forgiveness is just as important today as it was thousands of years ago
[16:44] Stephen reads from the “No Blame” chapter
[17:20] Everything, good or bad, is meant to happen
[18:18] “Nothing is as it seems to be through the filter of the filter mind”
[19:13] We are governed by an “underworld” of beliefs we don’t question
[20:31] These thoughts are not always accessible to us
[21:45] Joseph is portrayed as a spiritually mature individual
[23:22] He doesn’t cast blame, no matter what someone has done to him
[25:30] Reading enlightenment usually takes decades
[26:53] The lessons of this book are embodied in story form
[27:10] Story takes us into what it feels like to be free and forgiving
[28:00] Awakening can’t always be defined; you know it when you get there
[29:09] The litmus test is whether you can maintain a state of constant gratitude
[30:36] Meditation and self-inquiry can help us learn who we really are
[31:35] Stephen describes his vivid writing style
[32:05] The women often don’t receive a lot of attention in these stories
[33:08] “Everybody’s innocent if you go deeply enough into their lives”
[34:50] Stephen mined his own marriage for inspiration while writing about Joseph and his wife
[36:14] True forgiveness lets you see everyone’s innocence
[37:25] We’ve all been hurt, but we’ve all hurt others
[38:45] Seeing Joseph from his brothers’ eyes makes him a richer character

The only way to move forward is to let go of the past and embrace the way of forgiveness. Listen to this thoughtful discussion and pause to reflect as you seek a path to forgiveness in your own life.