How to hack a restaurant menu

A guide to eating healthy when eating out Posted by: Team Tony

There is no doubt that eating out is easy and convenient, but it also may be taking a heavier toll on your health than you bargained for.

When cooking at home, we know exactly what goes into our food — how much salt, oil, butter. But when eating out, even seemingly healthy options can be nutritional land mines. Generally speaking, the meals we get from restaurants (including fast-casual restaurants), are higher in calories and cholesterol than what we make at home. And after a while, it can really add up.

According to the National Restaurant Association, Americans eat out an average of five times a week. And the USDA estimates that every meal away from home increases an adult’s average daily calorie count by 135 calories.

That means if you eat out five times a week, you could gain up to 10 pounds a year. Or even if you only eat out twice a week, that still comes out to an extra four extra pounds a year.

But it doesn’t have to be this way. With the right amount of restaurant savvy, you can navigate through any menu to find ways to keep your meal light and right so that you aren’t sabotaging your health. Because it comes down to being smart — identifying food traps, recognizing pseudonyms for unhealthy fare, and finding opportunities to introduce healthy alternatives to your meal.

To help you keep your health in check, we deconstruct a typical menu and break down the do’s and dont’s of eating out: 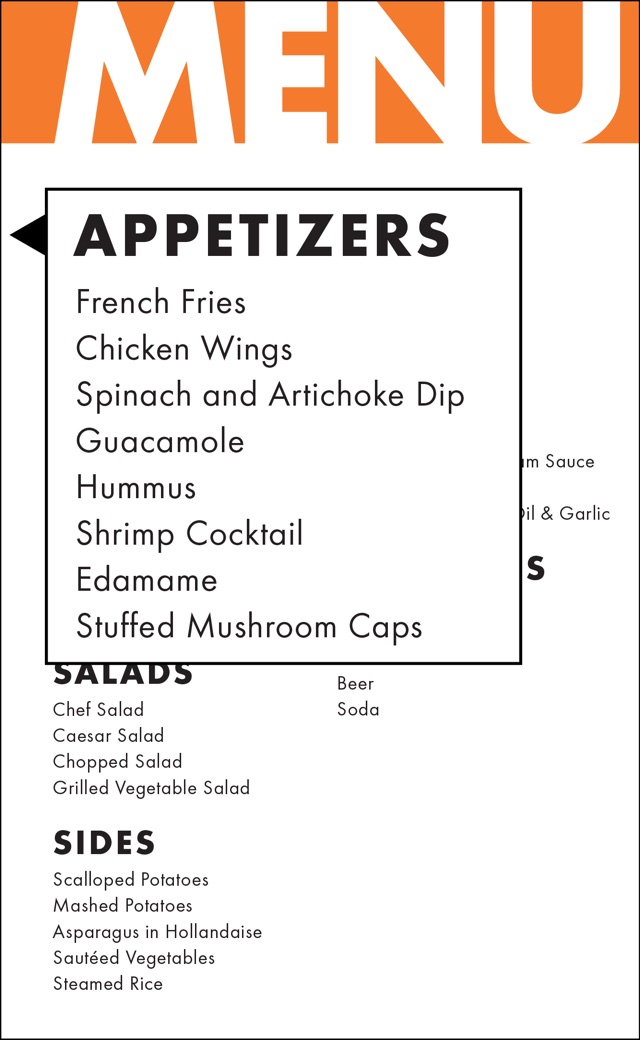 You probably don’t need a reminder to avoid fried foods (often disguised on menus as “crispy” or “breaded”) like french fries, chicken wings and chicken strips. But what about dips and chips? While a typical order of spinach and artichoke dip rings in around 1,600 calories, dips like salsa, guacamole and hummus are packed with nutrients and vitamins and are still relatively low in fat and calories.

As for the tortilla chips? Be sure to limit your intake since they are high in calories and sodium. Try asking the restaurant for a side of veggies to use instead. Other healthy appetizer selections include edamame, shrimp cocktail and stuffed mushroom caps. And if you can’t find anything healthy on the appetizer list, consider ordering an entree salad and having the restaurant divvy it up into the right amount of servings. 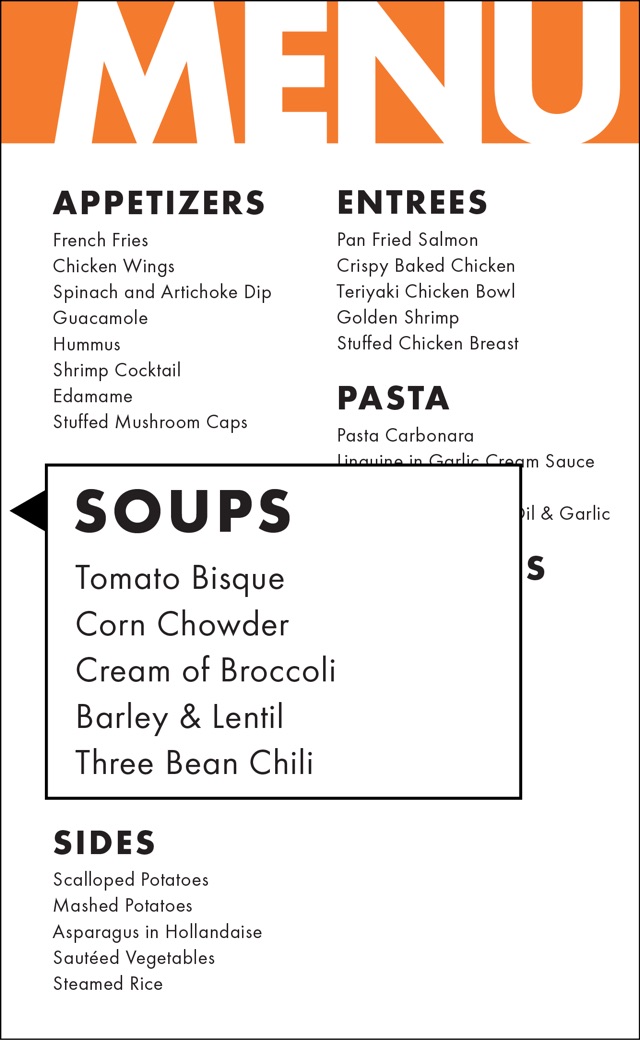 Starting your meal off with a warm bowl of soup may seem like a good idea. But some soups contain even more calories and fat that the main course. When it comes to selecting soups, steer clear of soups made with a cream base, like most bisques and chowders. Sometimes, however, a restaurant will use potatoes, broccoli or other veggies as the base, which gives the soup a creamy consistency without the calories. Other healthy choices include broth-based soups, barley and lentil soups, and even chilis. 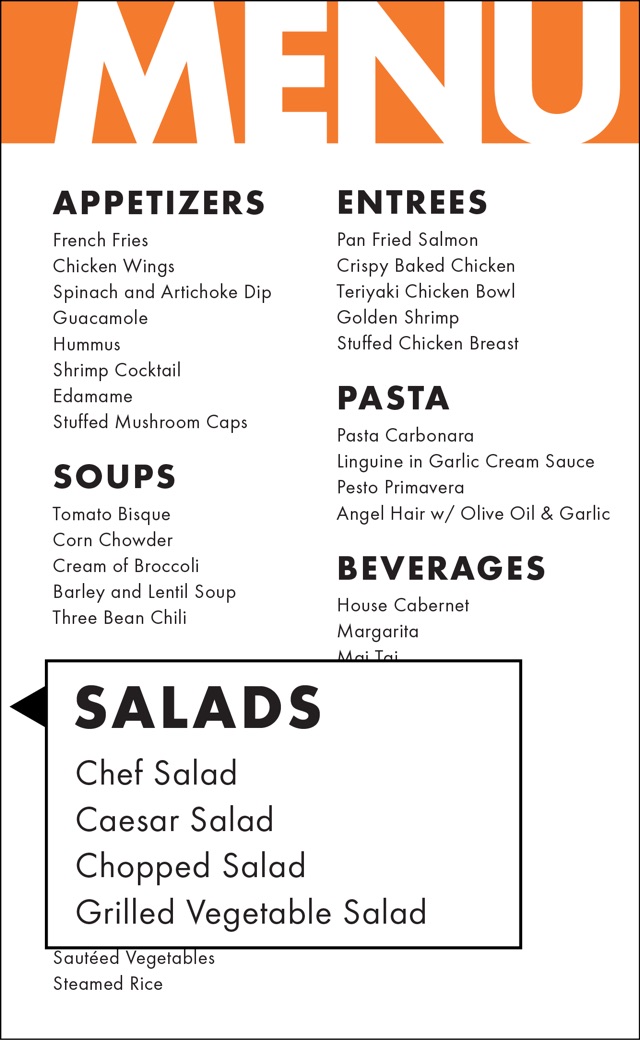 It’s easy to think that a bowl of greens makes for a healthy dish, but it’s what we put on those greens that fills you out instead of filling you up. Salads topped with meats, cheese, eggs and creamy dressings are teeming with hidden fat, calories and sodium. For a healthier salad, consider these alternatives:
•    Instead of animal-based proteins, consider chickpeas — a delicious plant-based protein that lends a creamy texture to any salad.
•    Nuts and avocado are nutrient-dense, but also calorie-dense, so have them in moderation. If the restaurant has sunflower seeds, these are a healthy alternative.
•    Subtract the cheese and egg and ask for extra veggies, or even grilled veggies if the restaurant can do so.
•    Instead of creamy dressings, try using a tablespoon of extra virgin olive oil, fresh lemon, sea salt and cracked black pepper. Or try ordering the dressing on the side, dipping your empty fork into the dressing then skewering a forkful of salad. You’ll be surprised at how much less dressing you end up using. 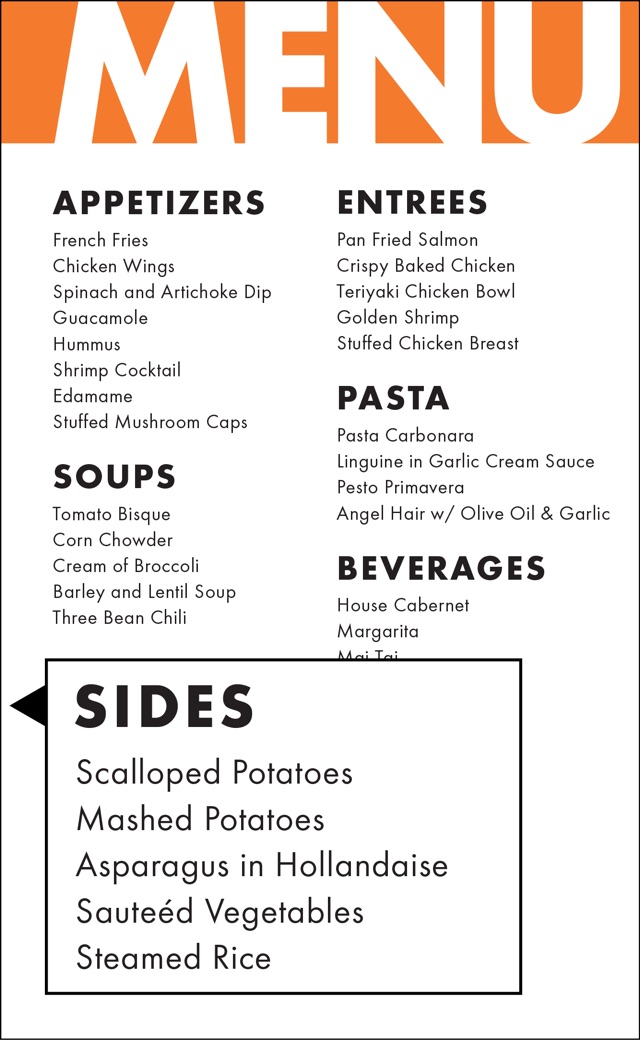 The main course is often served with side dishes. Stay away from anything “refried” (which usually describes beans, in which case the beans are mashed then fried again, often in melted lard), “scalloped” (which usually describes potatoes, in which case the potatoes are thinly sliced, cooked in cream and butter and topped with cheese), or “smothered” (which generally means covered in a heavy sauce or cheese). Consider swapping mashed potatoes for a baked potato, sautéed vegetables for grilled or steamed vegetables, or simply asking to scrap all sides in favor of a side salad. 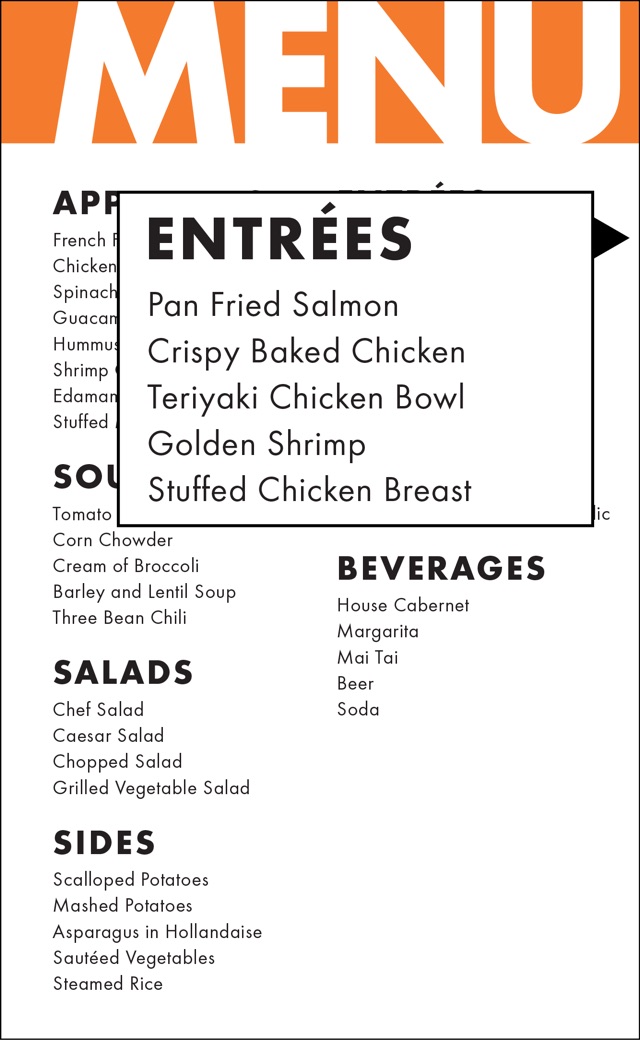 If you’re not careful, you could end up eating an entire day’s worth of calories in just one entree. Of course, avoiding menu items that say “fried,” “creamy,” “stuffed,” “breaded” is a good start. But what about those seemingly healthy items that are in fact loaded with sugars, fat and calories. Did you know that “sautéed” usually implies a heavy use of butter, oil or fat? Or that “crispy” and “golden” are just pseudonyms for “fried”? When it comes to how your entree is prepared, your best bet is to ask for it baked, steamed or grilled. Don’t be shy either about asking how much butter or oil is used and ask for them to keep it light.

Sauces are another component of entrees that exacerbate the number of calories. No wonder why an order of chicken in black bean sauce comes in at a whopping 800 calories. Be sure to ask for the sauce on the side, and don’t be shy about asking for salsas, chutneys, ketchup, mustard, steak sauce, barbecue sauce or even a side of marinara to use instead. 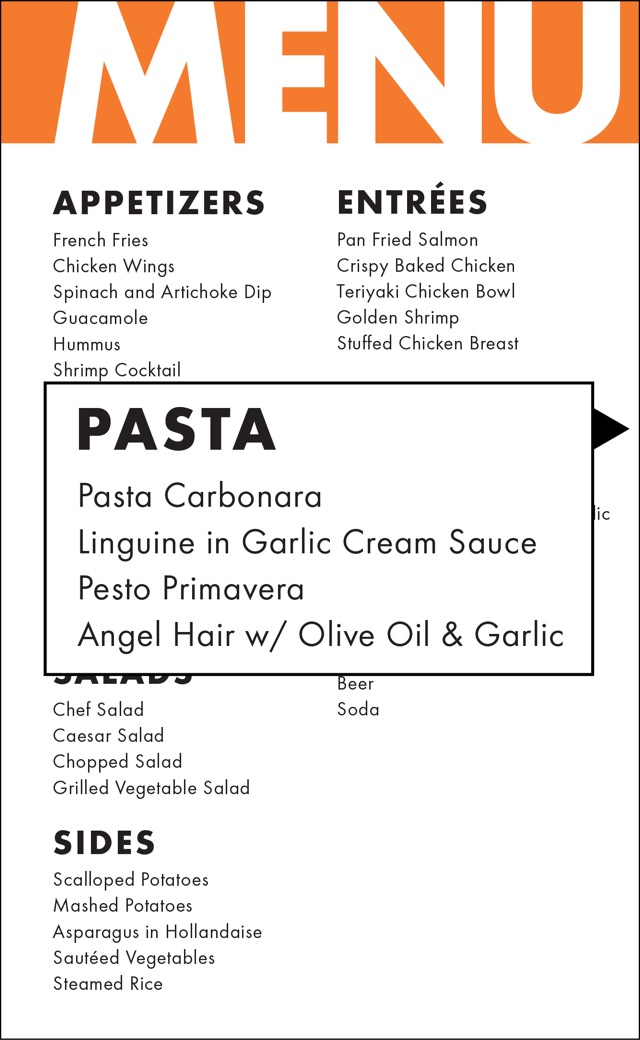 From time to time, it’s nice to indulge in a warm bowl of pasta. But it’s also important that you understand that you may be indulging more than you wanted to since not all sauces are created equally. Buerre blanc and bearnaise, for example, are butter-based sauces that are high in calories and in saturated fats. Carbonara and “white” sauce are cream-based sauces that pack the same sort of punch. Other sauces to be wary of are hollandaise, remoulade and roux. Healthier options include marinara, primavera, pesto, or even a little olive oil, garlic and lemon. 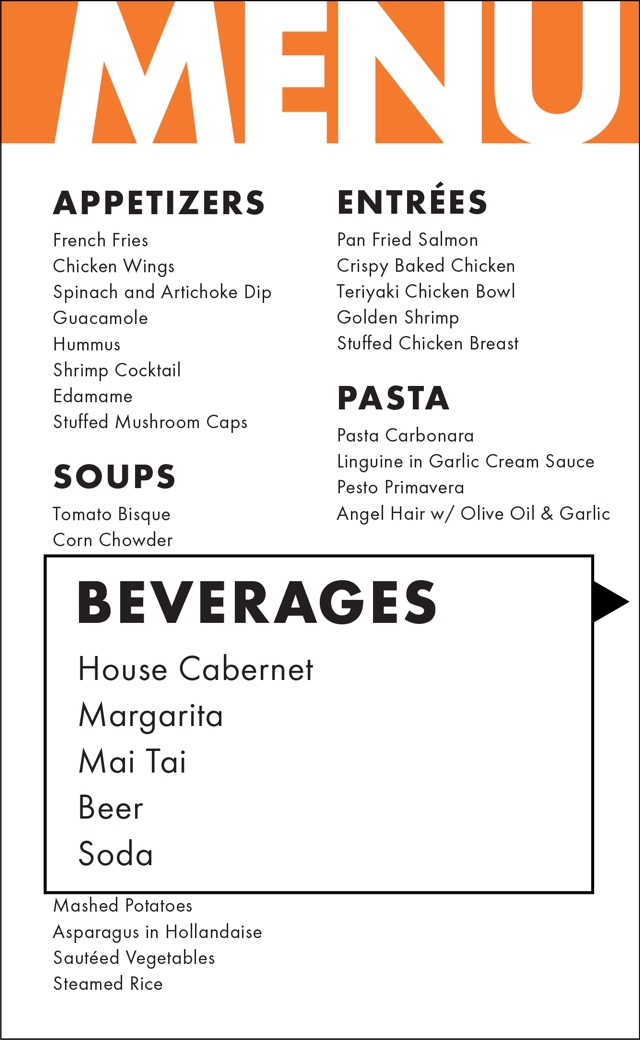 Skip the soda. That goes for diet soda as well. Tea, unsweetened iced tea, ice water with lemon, or sparkling water with lime are all better options. As for alcoholic beverages, reserve the exotic mixed drinks like margaritas, pina coladas for special occasions as they are loaded with sugar. And as a general rule of thumb, stay away from cocktails that use sodas and juices. Rather, opt for a glass of wine, a light beer, a vodka soda with lime, or a simple martini.