This article was originally published by Success Magazine on December 4, 2018 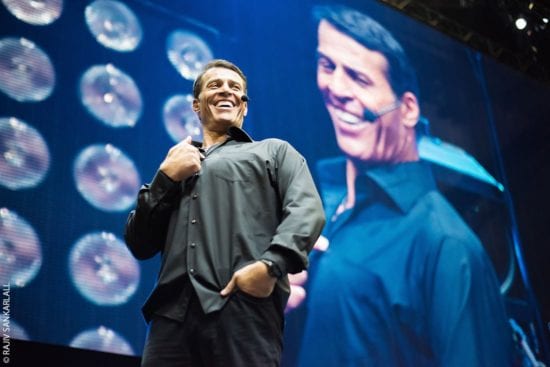 Tony Robbins, our cover subject for the Spring issue, is no stranger to setting and achieving his goals. Over the course of his career, Robbins has penned five best-selling books, worked with millions of people through his annual seminars, and coached countless celebrities, politicians and athletes. Now, he manages over 50 businesses that gross $6 billion in annual sales.

At his annual seminars and conferences, attendees often ask Robbins what the secret is to effectively setting and achieving their goals.

“You need a vision that’s large, and you need a plan that’s achievable,” he says.

By the first week of February, most people have already given up on their New Year’s resolutions. Why does this always happen?

Set and achieve your goals in 2019 and beyond with these strategies from Robbins:

1. Remember: The pursuit matters just as much as the goal.

Take, for example, that your goal is to make $100,000 for your new business in 2019. Instead of focusing on that dollar amount you hope to achieve, you should instead consider why you’re pursuing this goal and how the journey to achieve it will help you grow as a person.

If you grow in the process of achieving your goal, then that is success.

2. Set a goal with the right scope in mind.

People often give up on their New Year’s resolutions because they set goals that are too lofty.

3. Focus on what you want, not what you don’t want.

If you’re struggling to identify the core of your goal and what you truly want, Robbins offers this simple advice: Do something physical.

“You’re going to get depressed if you drop your shoulders, drop your head, speak slowly and think about what you’re afraid of,” Robbins says. “But if I get you to go for a really intense run and we start to focus on what you want, you’re going to come up with what you want.”

People often identify what they don’t want instead of what they do want because of fear. Try to reframe your mindset so you’re not being guided by fear, but rather facing it head on.

“Most achievers are afraid of living a life falling short of who they are, what they stand for and what they want to give to their kids or their wife or the universe,” Robbins says. “Because of that, they’ll overcome their fears. You can turn fear on itself.”

“Hundreds of people have achieved massive goals,” Robbins says. “And then their brain went, Is this all there is? I worked so hard for this and it’s not the same as I thought it would be. That is success without fulfillment, and that’s the ultimate failure.”

Take the example above. Let’s say you achieved your goal of making $100,000 for your business. You’ll feel a burst of pride and an uptick in energy right when you hit that goal. But then what? Without another goal to pursue and a daily sense of meaning, you will feel lost.

“When you’re heading toward a goal and you’re about to achieve it, you have to fit in the next ones,” Robbins says. “Because otherwise, there will be a drop in energy.”

5. Don’t worry about not achieving your goals.

What matters isn’t that the goal is achieved, Robbins says, but rather that you grow as a person on the path to achieving it.

“What makes us feel alive is progress—it’s growth, it’s aliveness,” Robbins says. “We grow or we die. That’s what life is.”

But just remember: Growth takes different forms for different people. Try to figure out what form of growth is most valuable to you, and go from there.

“You don’t just want to grow,” he says. “You want to grow so you can have an extraordinary life on your terms—a life that’s fulfilling to you.”