Protection matters in your 401(k)

Employee lawsuits are on the climb, and the Department of Labor is out in force Posted by: Team Tony

Did you know that the law requires you to “benchmark” your plan on a regular basis? If you didn’t, you’re not alone. Many business owners have no idea, but as the plan sponsor, you have a legal “fiduciary” obligation to make sure that your plan fees are fair and reasonable – and that all decisions are made for the sole benefit of the employees.

Despite your best intentions, if you are found to be non-compliant, the cost is steep. Of the plans examined in 2014, the Department of Labor (DOL) found 75% of them to be illegal, and the average fine was $600,000. Even more sobering is that 106 individuals – including plan officials, corporate officers (CEOs and CFOs) and service providers – were criminally indicted by the DOL. 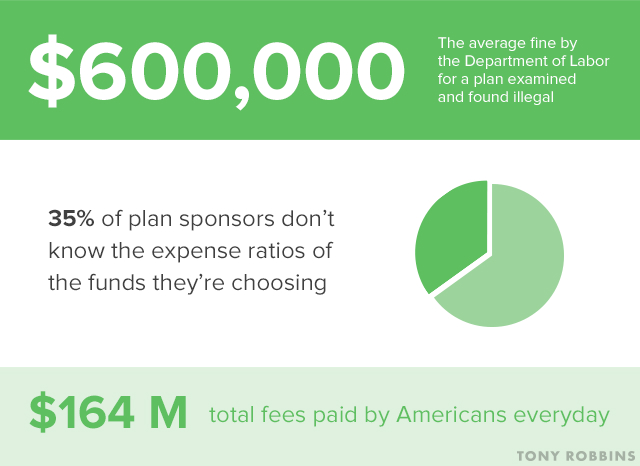 So how do you ensure that you are providing a competitive plan in which the fees are both fair and reasonable? Well, the idea is to benchmark the fees of your current plan every year against similar competitive plans. But plan providers don’t make this easy. They provide fee ‘disclosures’ that average 15 to 45 pages in length and are often entrenched in opaque language.

In fact, few plan providers are making business owners aware of their obligation to benchmark for fear of showing the true cost of the plan that was sold to them. But that hasn’t stopped the Department of Labor, which recently hired 1000 new auditors to find plans that are out of compliance. On top of that, employees are suing their employers and having plenty of success.

If you’re a business owner, America’s Best 401(k) will provide you with a complimentary benchmark – a side-by-side comparison to your existing plan – to make sure you are compliant and your fees are both fair and reasonable. Tony partnered with America’s Best 401k because they offer a low–cost, ultra–competitive solution with complete transparency. They also provide an independent fiduciary, which alleviates significant liability for the employer.

Although fee disclosure rules went into effect in 2012, collectively we have learned little from them. A whopping 71% of 401(k) plan participants believe they pay no investment-related expenses or that their employer pays them! Nothing could be further from the truth. And more than 35% of 401(k) plan sponsors (that’s you, business owner) indicate they do not know the average expense ratio of the funds in the plan that they provided to their employees.

In all, 401(k) fees cost Americans nearly $164 million per day, and can have the effect of reducing a participants’ balance available at retirement by 40-60%. It’s time to get free from the fee factories that dominate the 401(k) marketplace.

If you’re a business owner looking for a low-cost, ultra-competitive plan, America’s Best 401(k) provides an independent fiduciary which alleviates significant liability for the employer and a one-page fee report.