Where your fish comes from could be affecting your health Posted by: Team Tony

Seafood is a key part of healthy eating. It’s a high-protein, low-calorie meat that’s packed with nutrients you won’t find in other sources. It’s also delicious. But have you ever wondered: Where do fish come from? How are they raised? Is there a difference between farm-raised fish vs. wild caught?

The debate over farm-raised fish vs. wild caught is ongoing and controversial, with merits to both sides of the argument. But as the prevalence of fish farms continues to grow, and we are finding it on our plates more and more often, we must ask ourselves: What does this mean for our health? And what does it mean for our planet?

The depletion of wild fish

Global meat consumption reached 324 million metric tons in 2020, more than double the consumption in 1990. The reason for the dramatic increase? First of all, there are more people. The global population stands at nearly 8 billion today, and that number will grow to 9.7 billion by 2050. Next, the global middle class is on the rise. And in the societies where incomes have risen, so has protein consumption.

This is all leading to an ever-growing demand for animal protein that is so great, experts estimate that by 2050 we will need at least 70% more protein than what is obtainable today.

Wild fish are one of the world’s main sources of animal protein. More than a billion people across the world rely on fish as their main source of protein. But at the same time, our global fisheries operate at 2 to 3 times the rate than what our oceans can sustainably support – meaning we are taking far more fish out of the ocean than can be naturally replaced.

Even with the growing number of sustainable wild fish initiatives being launched throughout the world, the problem is still unresolved – we are depleting our oceans of a natural resource beyond the point of no return. And this is not only creating ecological chaos, but financial uncertainty as well. Just look at Newfoundland in Canada. For hundreds of years, the cod stocks in the area seemed inexhaustible. But in 1992, overfishing caused the cod fishery to collapse. Nearly 40,000 people lost their jobs as a result. And more than 20 years later, the cod population has still not recovered.

Imagine this collapse on a global level. Imagine what it would do – to our planet, to our economy and to the billions of people who rely on our oceans for sustenance.

Now, the answer to “Where do fish come from?” is no longer solely the ocean. Farm-raised fish could provide a viable and sustainable solution.

The main benefit of farm-raised fish, or aquaculture, is that it would allow us to produce enough animal protein to meet the growing demand. It provides a stable, predictable supply of fish that has the potential to be genetically modified to require less food and to grow faster. That also makes the jobs it provides more stable – a big deal in a traditionally unstable industry, as the fishers of Newfoundland discovered.

“A lot of countries could use more protein, and aquaculture is a good way to get there,” says Rosamond Naylor, an economist at the Stanford Institute for International Studies. But in the debate about farm-raised fish vs. wild caught, aquaculture has plenty of disadvantages, too.

From a surface level, aquaculture seems like the answer. Farm-raised fish could potentially provide a sustainable food source for the growing population and prevent wild fish populations from collapse. But the irony is that fish farming often comes at a surprising cost to wild fish populations.

The problem, Naylor explains, is that sustaining farm-raised salmon, shrimp and other carnivorous species requires a disproportionate amount of wild fish. That’s because certain farmed fish are fed processed fish meal made from wild caught herring, mackerel and sardine.

Naylor estimates that it requires about two pounds of wild fish to produce one pound of farmed fish.

Commercial fish farms also take up thousands of square miles of the aquatic ecosystem, displacing natural breeding habits. One of the biggest threats to wildlife is the destruction of land to make room for the rapidly expanding fish aquaculture. And confining so many fish in such close quarters has led to massive amounts of pollution and disease that can kill or harm wild fish, birds and marine mammals. 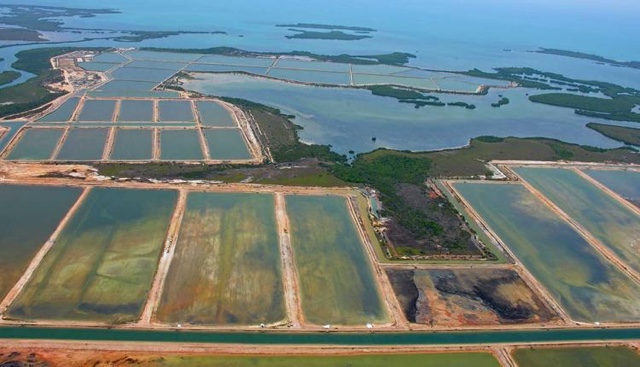 One proposed massive commercial farm 4.5 miles off the coast of San Diego would be able to produce 5,000 metric tons of farm-raised fish each year, making it the largest commercial operation in the country. Experts warn, however, that it would discharge the waste of 11 million pounds of fish directly into ocean waters, contributing to toxic algal blooms that already cause harm across the California coast. The project would also lead to an increase in vessel traffic that would pose serious challenges for a number of different species, including the endangered blue whale and leatherback sea turtle.

Farmed-raised fish have also been shown to escape their pens, spreading sea lice and other diseases to the wild populations. And when they interbreed with wild fish, they can alter the genetic code, diluting their natural survival skills. 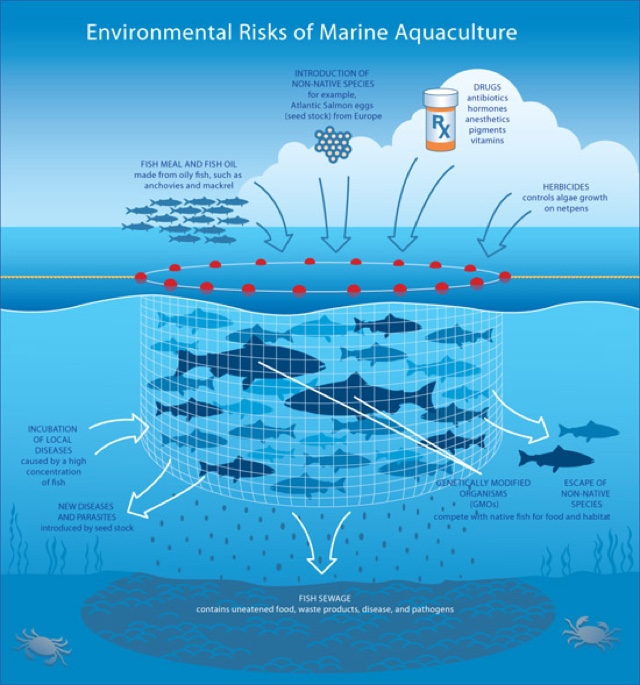 Environmental concerns aren’t the only drawback of farm-raised fish. Consumers’ health has also been considered, as there are a number of concerns about the potential hazards of farmed fish on the human body. Standard fish farming practices, which include the use of contaminated fishmeal and the intentional fattening of farmed stock, have proven to drive down the nutritional quality of the fish and drive up the contamination levels.

In the largest study of pollutants in salmon, researchers found high levels of carcinogenic pesticides (polychlorinated biphenyls, or PCBs, and two other organochlorine compounds, dieldrin and toxaphene) in farm-raised fish. Organochlorines damage the endocrine system, immune system and brain. Once consumed, these toxic compounds are stored in body fat, where they can remain for decades, and even be passed to a fetus during pregnancy or to a baby through breast milk.

In China, environmental degradation has led to water shortages and water supplies contaminated by sewage, industrial waste and agricultural runoff that includes pesticides. Farmers have dealt with the toxic waters by mixing illegal veterinary drugs and pesticides into fish feed, which helps keep their stocks alive, yet leaves poisonous and carcinogenic residues in seafood.

This is particularly worrisome given the fact that China produces 70% of the farmed fish in the world. And the U.S. Food and Drug Administration only inspects about 2% of imported seafood.

With the lack of transparency around farmed fish and the documented use of excessive chemicals, pesticides and antibiotics — which contaminate our food and our environment – it is clear that something is amiss. Due to overfishing of wild populations, the answer to the question of farm-raised fish vs. wild caught isn’t straightforward. But if we choose wild fish that is harvested with sustainable practices, there are many benefits.

Many people believe that wild-caught tastes better than farm-raised fish, and they could be right: Fish in their natural habitat eat more varied diets that give them a different flavor – and a brighter color that many restaurateurs prefer. The meat is also leaner, as wild fish get more exercise and contain more healthy omega-3 fatty acids. These fatty acids have a host of benefits including improving eye, heart and brain function and even decreasing depression.

Sustainable practices give fishers long-term rights in their fisheries and ownership of shares that grow with the business – and they work. Consuming sustainable wild fish helps to support fishing communities and restore damaged habitats.

If we want to initiate real change, we must change our habits. We need to take pressure off of the ocean without resorting to farm-raised fish. We need to eat clean, healthy food that we can trust. And if we choose to eat an animal, it must be one that was treated with respect and compassion.