How being lonely affects your health — and could shorten your lifespan Posted by: Team Tony

Do you live alone? How much do you rely on your smartphone or computer to interact with others? How often do you find yourself feeling lonely?

We don’t often think about the repercussions of living a solitary life, but maybe it’s time we start. According to research published in Perspectives on Psychological Science, a lack of social connection may have serious consequences for our health and longevity.

The effects of loneliness

Loneliness and isolation are complex human emotions that everyone experiences at some point in their lives. Since both vary in intensity, the effects of loneliness can impact some more than others.

hormone cortisol that causes the body to go into a fight-or-flight response, with loneliness and isolation being on the side of “flight” away from loved ones.

The effects of loneliness include:

Even if you have a large social network, loneliness can cause you to suddenly cut people off or not be responsive to invitations to go out.

Loneliness and isolation have a profound impact on other parts of your mind and body. Those who are lonely often choose to eat “comfort foods” that are higher in fat and sugar and usually experience a decline in sleep quality and quantity.

Loneliness can lead to heightened levels of stress, which alters the natural flow of various cellular processes inside the body and opens you up to premature aging. As with comfort food, loneliness may lead to indulging in alcohol or other substances to the point of dehydration, which also affects cell function that may cause signs of aging, like fine lines and wrinkles, to become more prominent.

Can you die from loneliness?

Loneliness and isolation can have a profound effect on your body and its natural processes, but can you die from loneliness?

The answer is yes. Research shows loneliness is as deadly as if you smoked 15 cigarettes per day and that people who are lonely are 50% more likely to die at a premature age. An extended period of loneliness compromises your immune system, which can lead to heightened inflammation, heart disease and a host of other serious health conditions.

It’s important, however, to make a clear distinction between being alone and being lonely. Solitude is good for everyone – it allows you to recharge and have a sense of self – but it’s important you always make a choice to be alone. But when you are in a large group of people and you feel lonely, it may be time to do some searching toward what may be causing this sense of loneliness to creep in.

What are signs you should look out for when it comes to determining your level of loneliness? Here are a few:

1. A lack of connection:

One of the clearest signs of loneliness is the inability to make powerful and intimate connections with others. It’s easy to make small talk with anyone, but it’s those emotional and heartfelt conversations that really bring people closer together.

2. An unshakable feeling of isolation:

It’s possible to still feel alone and be surrounded by hundreds of people. Another sign of loneliness is feeling alienation and isolation, even while you’re at work, on the bus or hanging out with friends.

People who try to engage others and be friendly, but still feel burned out and exhausted afterword, are usually lonely. Chronic loneliness can make it extremely difficult to spend time with your loved ones.

The science behind loneliness and isolation

Researchers from Brigham Young University analyzed nearly 35 years of data on how loneliness, social isolation and living alone can impact your lifespan. What they discovered was deeply unsettling.

“The effect of this is comparable to obesity, something public health takes very seriously,” says BYU researcher Julianne Holt-Lundstad, lead author of the study. “We need to start taking our social relationships more seriously.”

The data, which was based on roughly 3 million participants, found that the subjective feeling of loneliness increases risk of death by 26%. This is particularly worrisome given that loneliness plagues nearly 60 million Americans.

But what if you live alone? What if you enjoy spending time by yourself?

While being alone and feeling alone are not the same thing, the effect on longevity, however, is similar. Social isolation and living alone were found to be even more harmful to a person’s health than feelings of loneliness, increasing mortality risk by 29% and 32% respectively. This is on par with the risk mortality associated with obesity.

Yet as staggering as these findings are, they aren’t exactly new. A number of studies have revealed the ways isolation and loneliness can manifest in health issues: 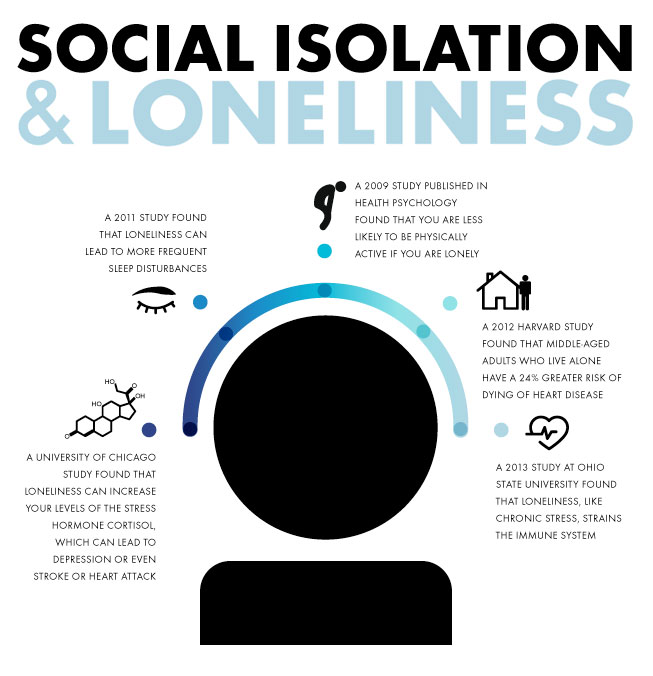 BYU researchers urge people to heed the study as a warning.[ No, no need – I think if we want we can put them at the bottom of the post]

“This is something that we need to take seriously for our health,” warns Holt-Lunstad. “This should become a public-health issue.”

These days, it’s easier than ever to go an entire day without actually interacting with another human being. We use texts and emails to say “I love you,” we use social media to wish others a “happy birthday,” we do our banking, book our travel and order groceries all with the simple click of a finger. But the irony is, the more technologically connected we become, the more socially isolated from each other we find ourselves.

The lack of social interaction and human experience is further exacerbated by the fact that more Americans are living alone than ever before. Did you know that in 1970, only one of every six households had a single person? Compare that to 2012, when more than one in four households had someone living alone. Experts chalk it up to Americans marrying later, having fewer children, divorcing at higher rates and living longer. When those factors are combined, it doesn’t seem so abstract that at some point, many find themselves living alone, even if only temporary.

So where does this leave us?

“With loneliness on the rise, we are predicting a possible loneliness epidemic in the future,” said Tim Smith, co-author of the study.

Not if we can start now to work against the effects of loneliness. Because the good news is that the study also found that the presence of social relationships provided the opposite, positive effect on health and longevity.

“In essence, the study is saying the more positive psychology we have in our world, the better we’re able to function not just emotionally but physically,” Smith adds.

So if you or someone you know finds themselves in a situation of isolation or loneliness, make the decision to do something about it. You may find that you not only live better, you live longer.

Experience the benefits of gratitude

The keys to spiritual wellness