The disastrous effects of single-use water bottles on the environment Posted by: Team Tony

How often do you drink bottled water? Once in a blue moon? Once a week? Several times a day?

Bottled water has become so prevalent in our society, a lot of us don’t give it a second thought. But it was not that long ago that bottled water seemed, well, irrational. I mean… it’s water. Why would we pay 10,000 times more per gallon for it to come in a plastic container?

The idea that bottled water is cleaner, safer and better-tasting than tap water has fueled explosive sales in the United States. In 1976, the average person only drank about a gallon of bottled water per year, but by 2017, the Pacific Institute estimates that each person will consume more than 300 gallons of it annually.

For the bottled industry, that massive growth is clearly welcome news. But for everyone else, and especially for the environment — not so much. Because along with the upward trend in sales comes a number of serious issues that are becoming harder and harder to ignore. Not only is bottled water taking a toll on our pocketbooks, it’s become one of the biggest threats to our planet — adding significantly to carbon emissions, overflowing our landfills, and destroying our marine environment — leaving it up to us to answer, is it really worth the cost?

Every single second, Americans go through about 1500 plastic water bottles. That’s a staggering 50 billion water bottles a year. And out of the 50 billion bottles of water being bought each year, the vast majority still end up in a landfill — where they take over 1,000 years to bio-degrade, and if incinerated, they produce toxic fumes.

Bottled water requires a number of resources throughout its life cycle. Energy is required to make the plastic and turn it into bottles, to obtain and treat the water, to fill and cap the bottles, and to transport it to market. For example, it’s estimated that producing plastic bottles consumes the equivalent of more than 17 million barrels of oil a year in the U.S. alone. That’s enough to fuel more than one million cars for an entire year.

As for the total energy output of bringing this water to market? The Pacific Institute calculates that the energy output involved in the entire lifecycle of bottled water in the U.S. is between 32 and 52 million barrels of oil.

THE PROBLEM WITH RECYCLING

Though the average recycling rate of PET bottles has been growing steadily, roughly 70% of all plastic bottles still get thrown into the trash — often making its way into our waterways. As for the bottles that do get recycled, almost half are actually exported to other countries for recycling. This means even greater amounts of transportation-related carbon emissions.

Bottles that aren’t recycled and are improperly disposed of often end up in the ocean, taking a massive toll on the marine environment: killing animals, poisoning the food chain and smothering the ecosystem. Today, there is an estimated 5.25 trillion pieces of plastic debris in the ocean. And by 2050, the World Economic Forum predicts there will be more plastic than fish in the world’s oceans.

Most of the garbage in the ocean accumulates in five relatively unexplored gyres found in the doldrums of the Atlantic, Pacific and Indian Oceans. Ever heard of the Great Pacific Garbage Patch? It’s twice the size of Texas and is floating in the Pacific Ocean between California and Hawaii.

The Garbage Patch is 80% plastic and weighs about 3.5 million tons — and it’s not just floating there, doing nothing. Rather, the patch is constantly leeching chemicals and toxins into the water, and it is also decomposing into smaller bits of plastic that are then consumed by animals.

The floating landfill also happens to be located along the migration route for populations of humpback whales, who are literally forced to swim through a sea of plastic. 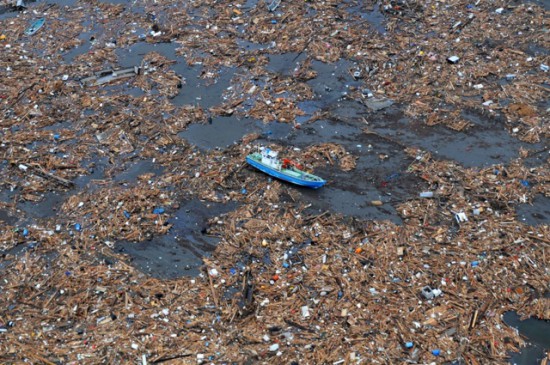 Though PET does not biodegrade, it does start to break down after prolonged exposure to sunlight and water. And these tiny pieces of plastic are ending up in the stomachs of countless marine animals and shorebirds, who can’t distinguish plastic from food. Once in their system, the plastic can block or even lacerate the digestive tract, weakening and eventually starving the animal. Plastic consumed by marine life has also been shown to leech genetic-altering chemicals that impede the ability of the animal to reproduce.

Plastic bottle tops are particularly problematic. Currently, they are not recyclable, and more and more often, they are ending up at the bottom of the ocean and in the stomachs of a variety of animal species that mistake them for food. You may have heard about the albatross found on a Hawaiian island with a stomach full of 119 plastic bottle caps. Or the sperm whale that was found on a beach with a plastic gallon bottle that had destroyed his small intestine, and a stomach full of plastic bottles and bottle caps.

Plastic has been shown to leach toxins into the bottled water. And research has shown that this is linked to health problems as severe as reproductive issues and cancer.

There are also other health concerns that result from consuming fish that have eaten plastic. Ongoing research explores how these toxic particles pass on to us when we eat seafood, as trace amounts then build up in our bodies over time.

WHAT YOU CAN DO

Despite these alarming facts, plastic continues to be one of the world’s most popular materials. In fact, plastic use is expected to double in the next 20 years, with the World Economic Forum estimating that by 2050, the amount of plastics produced globally will reach a staggering 1,124 million tons.

And when you do the math on the amount that will end up in landfills, the total amount of carbon dioxide pumped into the atmosphere, and the plastic packaging that escapes collection systems and makes its way to our oceans — the future becomes deathly frightening.

But it doesn’t have to be that way. Consumer demand is what drives plastic sales, and plastic production for that matter. By making small shifts in your lifestyle, you can take a powerful stand against plastic pollution.

With a reusable drink container, the average person can eliminate the need for 100 disposable bottles per year. This is the exact reason that San Francisco recently made the move to become the first city in America to ban the sale of plastic water bottles. And why San Francisco and Chicago airports, among others, introduced water filtration stations, where you can see the ticker account for how many plastic water bottles you “saved.”

Apart from reducing your use of plastic bottles:

• Say no to plastic straws, and make every effort you can to swap out plastic bags for reusable shopping and produce bags
• Purchase items like laundry detergent in cardboard boxes rather than plastic jugs
• Opt for cloth diapers over disposable ones
• Choose matches over lighters
• Don’t use plasticware when you can use silverware
• Pack your lunch in reusable containers and bags
• And, as if this needs to be said, recycle every item you possibly can

The rate at which we go through plastic is simply not sustainable — especially for the environment. But if we start making the changes now, transcending the boundaries that we have imposed upon ourselves, we can shift the trend and preserve the world we live in for future generations to come.