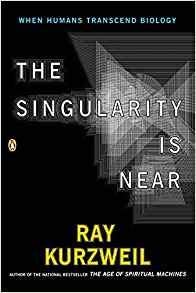 The Singularity is Near

The great inventor and futurist Ray Kurzweil is one of the best known and controversial advocates for the role of machines in the future of humanity. In his latest, thrilling foray into the future, he envisions an event, the “singularity” in which technological change becomes so rapid and so profound that our bodies and brains will merge with our machines. The Singularity Is Near portrays what life will be like after this event, a human machine civilization where our experiences shift from real reality to virtual reality and where our intelligence becomes nonbiological and trillions of times more powerful than unaided human intelligence. In practical terms, this means that human aging and pollution will be reversed, world hunger will be solved, and our bodies and environment transformed by nanotechnology to overcome the limitations of biology, including death. We will be able to create virtually any physical product just from information, resulting in radical wealth creation. In addition to outlining these fantastic changes, Kurzweil also considers their social and philosophical ramifications. With its radical but optimistic view of the course of human development, The Singularity Is Near is certain to be one of the most widely discussed and provocative books of 2005.