Why food technology is the next big thing

Finding a more sustainable way of feeding the world Posted by: Team Tony

A plant-based burger with the same taste and fibrous texture as meat. Creamy cheese that doesn’t have an ounce of dairy. Meatless sausages and roasts. Crispy chicken tenders made from…peas?

No, these are not gimmicky attempts at meat substitutes. These are the foods of the future.

Food poses one of the biggest dangers to the planet. Over the past several decades, the global consumption of animal protein has doubled, and is expected to nearly double again by 2050, when the global population reaches at least 9 billion. 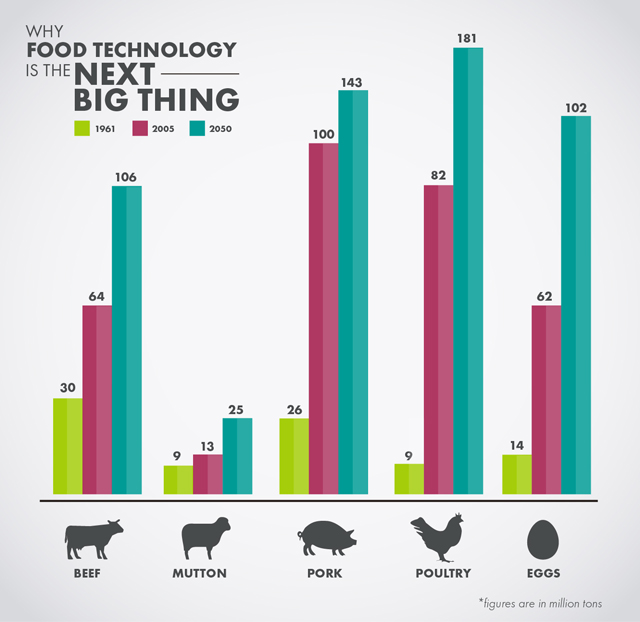 The reason for this surge can largely be attributed to the economic growth in developing countries. People can afford more animal protein. And while less poverty is obviously a good thing, it takes a lot more resources to meet the growing demand.

The World Health Organization estimates that annual meat production will increase from 218 million tons in 1997-1999 to 376 million tons by 2030. That’s an increase of roughly 72%.

Right now, most of the global demand for animal products is being met by concentrated animal feeding operations, more commonly known as factory farms. Factory farms rely on commercial breeds of livestock that have been bred to put on weight quickly. They also confine the animals closely together, using gestation crates, battery-cage facilities and veal crates, to minimize their costs. This model, however, is not only cruel, but completely unsustainable.

Humanitarian issues aside, factory farms create a host of other problems, particularly concerning the environment.

Another environmental problem with increasing the number of animals for consumption is water use. The irrigation of feed crops accounts for nearly 8% of the world’s human water use. Take a look at how much water is required to produce just one pound of meat: 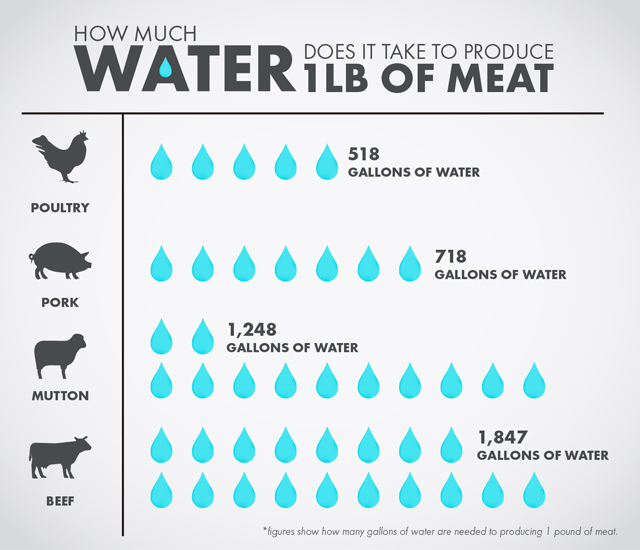 Livestock operations are also major polluters. Manure, mortality, wash water from animal operations, as well as wastes from processing operations all contain pollutants that can seep into groundwater or surface water, threatening public health. It is estimated that in the United States alone, livestock is responsible for a third of the nitrogen and phosphorus into freshwater resources.

This is why it is imperative to find solutions outside of animal farming. Not only is the traditional food industry inhumane, it is absurdly destructive to the planet. Yet until recently, there hasn’t been a viable alternative.

Enter a new wave of startups focused on giving the industry a massive overhaul. These companies are creating plant-based alternatives to animal proteins such as chicken, beef, bacon and even eggs — alternatives that are produced in a more sustainable, eco-friendly way, and just so happen to taste pretty spot on.

To create these new “meats,” the companies are turning to food scientists who have been finding new ways to use temperature, pressure, timing and chemistry to turn plants into foods that have the same look, smell, taste and texture as animal-based proteins.

Take a look at Beyond Meat, a company who has figured out a way to use an extruder to heat, cool and pressurize a mixture of proteins and various nutrients into a structure that replicates the fibrous texture of muscle. The firm’s flagship product, Beyond Chicken Strips, have been available in markets since 2012, and have already become a staple in households across the nation. Just this February, the company released the Beast Burger, which has more protein, more iron, and is generally more nutritious than beef burgers. It also happens to taste just like the real deal.

Hampton Creek is another company looking to disrupt the food industry. Its line of plant-based mayonnaise, Just Mayo (which comes in original, sriracha and chipotle flavors) and cookie dough, Just Cookie Dough, are now available in 30,000 stores across the states, including Target and Walmart. The company is currently pursuing their most ambitious project to date — a plant-based egg.

While there have been meat substitutes on the market for quite sometime, the difference here is that these companies are not merely taking tofu and trying to make it taste like meat. They are starting on the molecular level to reconstruct amino acids and nutrients in a way that forms foods with the same meaty, cheesy or creamy flavors and textures as animal-based products have. They are essentially just taking the animal out of the equation.

Yes, it’s a massive challenge, but also a massive opportunity. The problem, of course, is that many people are hesitant about trying these alternatives and even more skeptical about incorporating them into their routine on a regular basis. In theory, at least, if this plant-based movement did grab a hold, it would provide a viable solution to the growing population and growing demand for meat. And it would do so without overwhelming the planet.

So try opening up to the possibility of plant-based alternatives. The shift to plant-based foods may ultimately be inevitable, but with some of the exciting new options out there, you may just discover that you make the change by choice.

What is precision medicine?

How to hydrate your body