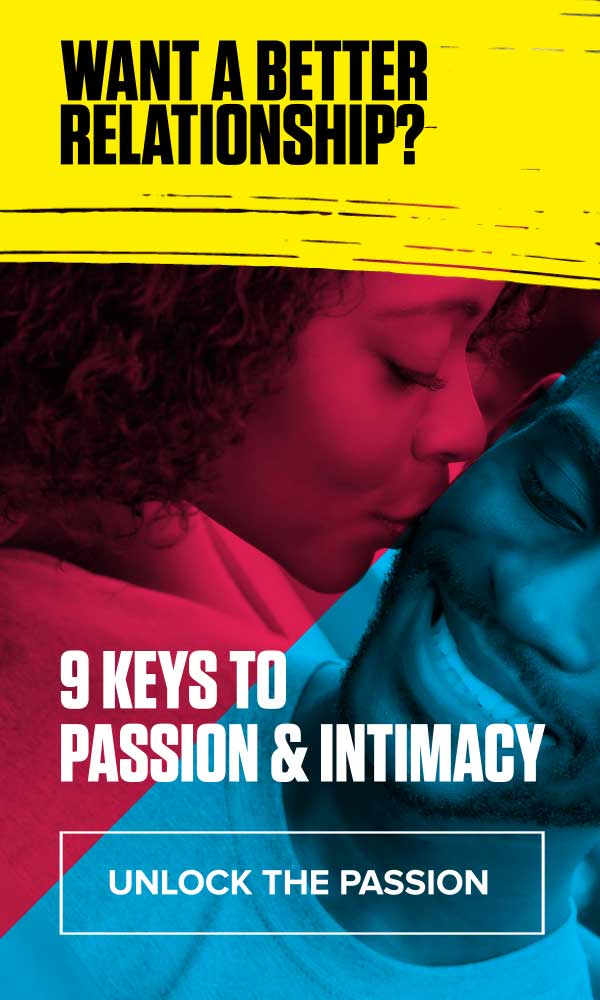 Edward comes home from a rough day at work. He rants and raves to his wife, Jill, about the issues he has with his co-workers and his boss. Jill listens, and even engages – sharing common sentiments about how frustrating that must be. Edward eventually comes out of his rut and meets Jill at her level.

Jill comes home from a rough day at work. She rants and raves to Edward. Edward however, has a strong inclination to fix her issues. He cuts into her diatribe, interjecting his thoughts on how she can solve her issues. She grows increasingly upset. She yells, saying that he doesn’t “understand” her.

Here’s the secret. The game of life in a relationship is about mastering two things: your state and your meaning. If you can master those two, it’s a different ballgame. It will change everything. And it all starts with mastering the power of V – venting, that is.

The feminine force has something no extremely masculine man will ever understand. That is, women experience everything all the time. The reason for this is because the feminine brain has what is called “diffuse awareness” – an instinctual and biological trait instilled in women so they could be entirely aware of their surroundings. As Tony Robbins explains during his Date with Destiny event, it began as a matter of survival, and has evolved into a deep-seeded need for women to talk and share and to uncover what they are feeling. And it manifests in many different ways.

Even something as mundane as talking on the phone is a means of satisfying that instinct. In fact, feminine females can chat for hours and then not even remember the specifics. Because it isn’t about the content, it’s about connecting and sharing.

The masculine energy, on the other hand, does not want to share problems, it wants to solve them. So a very masculine man will think, “What’s wrong with you? Why do you keep talking about this problem? Why aren’t you just taking the action to solve it?” Because men think there is a point to a woman venting.

THE MEANING WE ASSIGN

A masculine male will simply not be naturally inclined to share a woman’s emotional current when she is venting. But when a man doesn’t do this, the woman feels rejected. She feels alone and she sees him as arrogant and callous. She will even tell herself: “He thinks he’s better than me. He doesn’t care about me.” Because that would all be true with a feminine energy, but it’s not true in a masculine world.

On the flip-side, when the man’s attempt of resolution is met with a woman’s frustration, he tends to make up lousy meanings. He may think that his woman is just not listening to them, or won’t let him solve the problem. He may think the woman doesn’t believe they he can solve the problem, or he may even label the woman as being unhappy. And ultimately, the man will tell himself: “Nothing I do will ever work. I can never make her happy. Nothing will make her happy.” But when a man starts making up those stories, the relationship is in jeopardy. That’s when there will be zero progress – and if a relationship isn’t growing, it’s dying.

The reality is, what is upsetting (or even enraging) you is not what your partner is doing, it’s the meaning you’re making about it – and it isn’t true. We think that men are just like women and women are just like men. Even though intellectually we know better, when our partners do something, we interpret it through our world.

Diffuse awareness means a women is feeling everything all the time. For a masculine man, there is no such thing as true multitasking. Even when a man thinks he is multitasking, he is really just doing a little bit of this and a little bit of that, moving back and forth, doing one thing at a time. That’s the masculine brain – pure focus. But a woman has the power to focus on everything simultaneously. That’s why a man can think he’s uncovered the problem, but then twelve other problems surface, because she doesn’t even realize all the things that she’s thinking about.

Yet no matter what comes out, a woman does not want a man to solve her problems. Because what she really wants to do in the feminine world is to heal. And that doesn’t mean to necessarily solve it, but rather, she wants to be heard and feel understood – that is what brings healing.

If a man can learn to listen, if he can learn to appreciate her and the way her brain works, this will become one of the most powerful tools in a relationship.

“I’ve made my mistakes with my wife, more than enough times. And I’ve learned and gotten better. I can now look at all that is going on, and instead of trying to solve the problems, I just give her my presence. I stay here, while she lays it all out on me. And I don’t take anything personally. Even if she says: “You did this,” or “You did that.” I remind myself that what she’s saying isn’t what she means. It’s not about me. She is letting pent up energy out and creating space. She’s just venting and externalizing. It really is amazing if a woman feels understood and feels affirmed, then right after that, you can deliver a solution and it will be received in a completely different way. She will feel relief and have the space to appreciate you.”  – Tony Robbins

Why is love blind?

How to rekindle a relationship

Healthy expectations in a relationship