Home » The power of certainty

The power of certainty

Have you ever wondered how world-class athletes – the ones whose names will live throughout history, like Serena Williams, Michael Phelps and LeBron James, get to where they are? Do they just show up and start shooting three–point shots or hitting 200 mile-an-hour serves? Certainly not.

What about coaches? What are the secrets behind the massive success of legendary coaches like Pat Riley, John Wooden and Bill Belichick – who have more earned back-to-back championships and created sports team dynasties that last for decades, even with completely different kinds of players?

Tony Robbins knows the secrets of wildly successful athletes, coaches and more. In this Peak Performance podcast, you’ll find out what he has learned from over 40 years of working closely with some of the best pros and teams of all time. From how to gain certainty in yourself to creating a winning mindset, you’ll discover principles that you can use to achieve real results in your own life.

First, Tony shares the story of coaching a coach: Pat Riley, renowned basketball executive and former coach, who won four NBA Championships with the LA Lakers and one with the Miami Heat. But when Tony met him, Pat wasn’t on a winning streak. The Lakers had lost, despite giving it their all. Pat wanted to take a tough love approach, but they pushed back. They lost rapport. Tony told him it’s human nature to push back when someone pushes you, but this principle can also be harnessed to inspire and drive a team. By giving them an easier goal, they will naturally want to go above and beyond your expectations. And it worked.

Tennis legend Andre Agassi was skeptical of Tony’s methods – but his game was transformed when he began using goal visualization and the power of physiology to change his mindset. Tony told him, “Close your eyes and vividly experience hitting the tennis ball 10 times.” Use the law of attraction and focus on what you want – not what you don’t want. As Andre did this, it changed his physiology. It put him in a state of peak performance, giving him a sense of certainty in himself that allowed him to take his game to the next level.

It isn’t just in sports that certainty rules. In business, marketing, selling, life and relationships, the person who’s most certain will not only influence the other person, they will also execute at a higher level. Certainty allows you to accomplish the impossible. In the last part of the podcast, Tony explains this concept to world leaders and policy makers in Dubai at the World Government Summit. As he tells them, “It’s our job as leaders to close the gap between what’s possible and what’s true.” Don’t miss this podcast to learn why certainty makes all the difference. 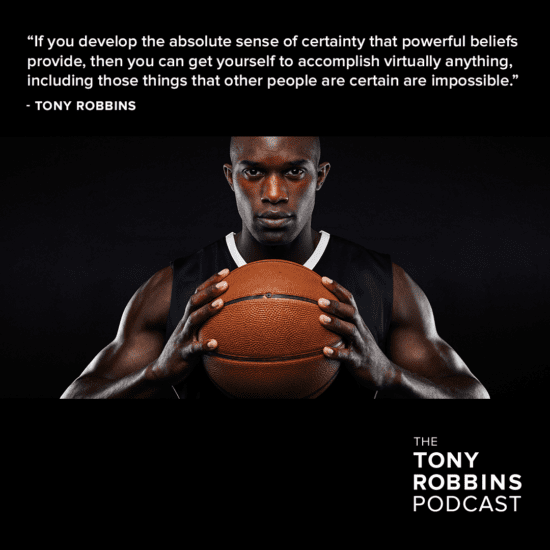 Unlock even more strategies for success with a no-cost Peak Performance session. Get a private session with a Peak Performance Strategist and start destroying your obstacles, developing an unshakeable mindset and gaining a competitive advantage in business and in life. These are the same tips Tony’s shared with Pat Riley, Andre Agassi and more, and they’ll change the game for you, too.