How the SIRIUS XM founder uses her gifts for good Posted by: Team Tony

More than 34 million people subscribe to SIRIUS XM radio – but it was only 30 years ago that the concept of delivering high-quality radio service to listeners via satellites was almost inconceivable.

In the early 1990s the FCC established frequencies and licensing rules for the first-ever satellite digital audio radio service. And it was all due to the persistence of one woman: Martine Rothblatt.

Who is Martine Rothblatt?

Martine was the top-earning CEO in the biopharmaceutical industry in 2018, earning a compensation package of more than $37 million. The company that she started from nothing is now a $6 billion business, and with its acquisition of Pandora, is set to capture even more market share in the fast-growing digital audio space. Even if the founding of SIRIUS was ALL that she had done, it would be quite an accomplishment, a peak level of success that most people only dream of achieving.

But Martine didn’t stop there. She pivoted her entire career as an engineer and shifted her attention to biotechnology, creating United Therapeutics in 1996 after finding out her daughter had pulmonary hypertension, a rare life-threatening disease. When she found out that 80% of donated lungs end up unusable, she figured out a technique to manufacture them in unlimited quantities and overcome the severe shortage of donor organs. She even went on to invent the first electric helicopter to deliver them in a way that is environmentally friendly.

Martine has built her entire career on achieving the seemingly impossible. She not only envisioned the success of satellite technology before anyone else, she deeply believed in herself despite her detractors. People said it would never work, it’s too far, there’s too much in the way. But Martine is a true visionary. She says, “A million people can tell you that 2 + 2 is not 4, but you’re not going to believe them. You know 2 + 2 equals 4.” She just had to prove it. In the podcast, she reveals her process for turning visionary ideas into technology that we can use every day.

Martine says, “Whenever they said something couldn’t be done, I figured a way around that.” She has this in common with every great leader and successful person on the planet, and it’s what makes her so unstoppable. As she also likes to say, it takes 99 no’s to get to a yes – and she is grateful for every “no,” because it means she is closer to a “yes.”

Martine isn’t just a pioneer in business. She underwent gender reassignment surgery years ago, and has been a powerful advocate for transgender rights ever since. She bottled up her feelings for decades, eventually confiding in her wife – who provided the unconditional love and emotional support she needed to finally be who she really was. The story of Martine and Bina is a real-life love story, and you’ll hear more about it in the podcast.

Listen as Tony talks with Martine at a Business Mastery event – and is completely blown away by their conversation and the incredible force she is. 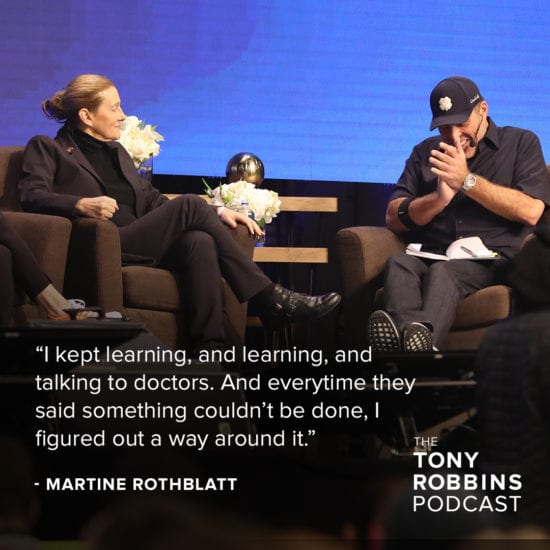 There’s no doubt Martine is a force to be reckoned with: smart, talented, brave, compassionate and more. She has discovered her gift in business – true entrepreneurship – and leveraged it to not only create the life she desired, but to make positive change for others and for the world.

Martine takes her own life as inspiration for her causes, living her truth and doing what she can to help others do the same. She uses her gifts for good, transforming visionary ideas into real-life solutions in a way many entrepreneurs only dream of. And she has found massive success living life by her own blueprint.