How to avoid relationship arguments

We all know the couple who bickers over dinner, bringing up old incidents or accusing their partner of “always” being a certain way. Some of us know the couple who yells over each other until they’re loud enough to wake the neighbors – but what if that couple is you?

If you find yourself constantly bickering about the same topics or having loud fights and saying things you don’t mean, you may be stuck in harmful patterns of communication. You need to learn how to avoid arguments in a relationship and turn them into productive conversations instead.

Want to stop arguing with your loved one?

What causes most relationship arguments?

The causes of relationship arguments vary widely depending on the couple – and sometimes it can seem like there is no cause at all. According to one study, the most common causes of arguments included one partner not showing enough love or affection; a partner not feeling appreciated; jealousy or possessiveness; frequency of sex; and housekeeping and chores. Not surprisingly, relationship stressors like money also made the list, as well as “big” arguments like future goals, career plans and whether a couple wants children.

To discover how to avoid arguments in a relationship, we must dig deeper. Two things are ultimately behind all of the issues listed above: communication and fulfillment of needs. Every partner brings certain needs and expectations to a relationship. When their needs are not fulfilled or when their expectations aren’t met because they haven’t communicated effectively, conflict occurs.

Is it normal to argue in a relationship everyday?

Every couple and relationship is different, so it’s impossible to say how common or “normal” it is to argue every day. Some couples may argue frequently while others seem to hardly argue at all. The better question is whether it is healthy to argue in a relationship every day. And the answer is no: Constant arguing in a relationship may be normal, but it isn’t healthy.

If you know how to resolve conflict, some arguing in a relationship is healthy. It can help you learn more about your partner and make important decisions. But if your arguments are constant, or if they are more infrequent but often escalate into yelling, door-slamming and anger, it’s a sign you need to learn how to handle arguments in a relationship. 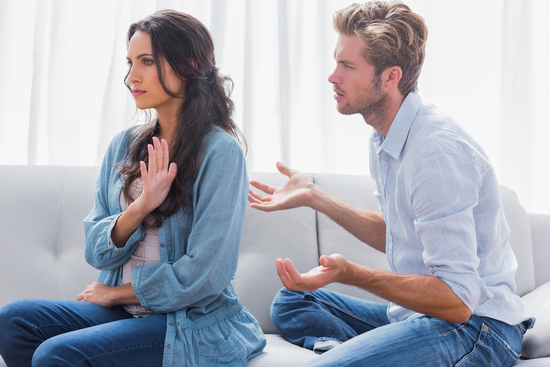 How to avoid arguments in a relationship

Recognizing harmful patterns is the first step to breaking free of them. Some of the most common patterns that lead to relationship arguments are:

You can’t change the past, so why keep bringing it up? If you can’t let go of the past, you’re preventing yourself from moving forward.

Every relationship has conflict – the lasting ones figure out how to resolve it. Avoiding confrontation leads to bigger arguments down the line.

Competing to be heard.

The most important part of communication is listening. If you end up yelling and feeling like you need to “win” the argument, your relationship has already lost.

A conversation can devolve into an argument if one partner feels like they’re not being heard. You are your partner’s number one fan, and making an effort to actively demonstrate that you are is one of the best ways to avoid arguments with your partner. 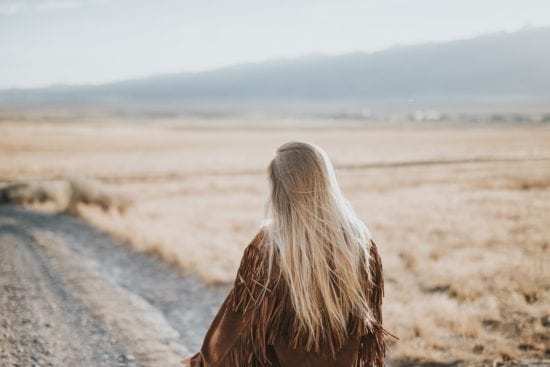 One of the easiest ways to avoid relationship arguments is to stop accusing your partner of being the problem. When you throw out accusations, it automatically puts your partner on the defensive – and people on the defensive say and do things they don’t mean and that are not productive. Making the conversation about your own feelings rather than your partner’s actions is a more compassionate way to communicate.

This means using “I statements” rather than “you statements.” “I statements” start with “I feel” and express nonjudgmental emotions. They open up the conversation to your partner to talk about their own feelings, and how you can come to an agreement.

Another reason “I statements” are useful is that they get to the core of the problem. To avoid arguments in relationships, you need to stop rehashing the same small fights and think about the bigger issue. Rather than getting stuck on a single event, like “You never do the dishes,” using an “I statement” forces you to think about why it upsets you. It tells your partner what the real problem is: “I feel unappreciated” or “I feel our relationship is unequal” are statements about bigger issues. This allows the conflict to become an opportunity to reach an understanding and creates a new level of trust and intimacy.

The saying “it’s not what you say, but how you say it” has become so commonly used, it’s almost a cliché. But that’s because it’s true. One expert found that 38% of a message is conveyed through vocal elements other than your words – so if you’re wondering how to avoid arguments in a relationship, look at your tone first. Using the right tone opens up a conversation because your partner won’t feel judged. Using the wrong tone shuts down the conversation and turns it into an argument.

Your tone can put your partner on the defensive just as much as your actual words. When you make your “I statement” or start a discussion with your partner, make sure you do so without yelling, sarcasm or exasperation. Talk at a normal pitch and a steady pace. Don’t slow down too much, but make sure you pause between thoughts so your partner has a chance to process. Starting a conversation on neutral ground goes a long way to avoiding relationship arguments.

Listening makes up about 45% of the time we spend communicating – but sometimes we aren’t very good at it, especially with our partners. When you come home after a long day at work, you’ve probably already spent a huge amount of time listening. Or perhaps you’ve spent all day thinking of important things to tell your partner – and you don’t leave room to hear what they have to say. Use the power of deep listening and you’ll learn how to avoid arguments in a relationship: 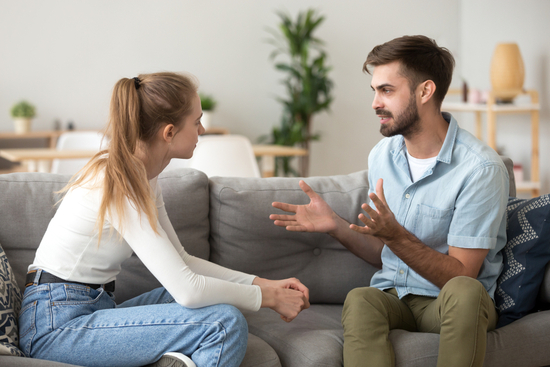 Turn off the TV or podcast, step away from your phone and focus on your partner.

Use your body language.

Show that you’re listening by facing your partner, making eye contact and encouraging them to talk by nodding or using verbal prompts.

We often spend our time “listening” preparing a response for the speaker. This is not true listening. Rather than responding with your own feelings or with a solution, offer a summary of what your partner said that reads deeper between the lines. “It sounds like you’re unhappy with” or “What I’m hearing is” are good summary starters.

Don’t assume you know where the story or thought is going, and don’t offer up your own experiences to show understanding. Instead, ask questions. They show that you’re interested and want to help, rather than making the conversation about you.

Despite all your best efforts, from time to time you’ll still need to know how to handle arguments in a relationship. We are all human, after all. You now have the tools to recognize when communication is breaking down – and you can still take steps to defuse the argument. If you notice you’re getting defensive, making the same points repeatedly or bringing up the past, stop. Take a breath and start again with an “I statement.” You can even say, “OK, let’s start over” and begin again or ask your partner to begin again.

Using humor can work to defuse a situation before it turns into an argument. This works especially well with small arguments that you seem to have over and over – the classic putting-down-the-toilet-seat argument, for example. Rather than getting caught up in bickering that doesn’t lead to a solution, laugh about it and move on. Your relationship is more important than having that argument.

Whether you’re looking for ways to avoid constant arguing in a relationship or defuse occasional flareups, these strategies work. Good communication is a building block of any successful relationship. If you do the work, you’ll reap the rewards of intimacy, passion and unconditional love. It isn’t always easy, but it’s worth it.

Stop having unwanted arguments with your loved one by utilizing strategies from Tony Robbins’ Ultimate Relationship Guide.