Recently I experienced the honor of named to Worth Magazine’s 100 Most Powerful People in Global Finance, and this humbling opportunity has allowed me to shine a light on something I am very passionate about – financial freedom for Americans.

The average American today has their wealth in two places – their home and their 401(k). And they both have levels of abuse that most people cannot imagine. Consider this: For 30 years, the 401(k) industry didn’t have to tell anybody how much they were charging! Now that they must disclose, 401(k) providers bury their fees deep within long and difficult to understand documents, effectively keeping their customers in the dark.

But what the majority of Americans don’t realize is that an increase in 1% in fees will cost you 10 years in retirement income!

I like to tell this story as an example; three childhood friends, David, Tyler and Joe, at age 35 all have $100,000 to invest. Each selects a different mutual fund, and all three are lucky enough to have equal performance in the market of 8% annually. At age 65, they get together to compare account balances. On deeper inspection, they realize the fees they have been paying are drastically different from one another. They are paying annual fees of 1%, 2%, and 3% respectively. The impact on their ending account balance is profound. 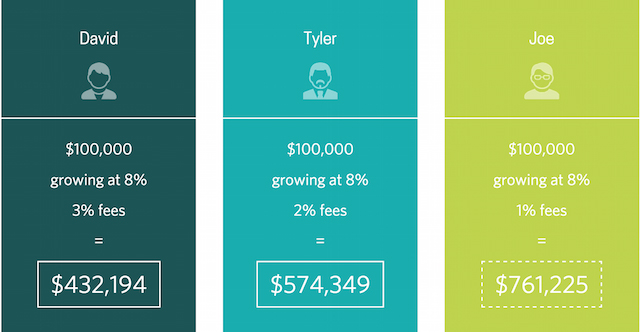 Same investment, same returns, and Joe has nearly twice as much money as his friend David!

What is even worse is how that disparity will effect each one in their retirement years. David, Tyler, and Joe each need $60k for retirement. But as you can see, David – struggling under the weight of the highest fee – will run out of his money before his 75th birthday. Joe, on the other hand, will have enough money to last until age 95.

I learned about these abuses while writing MONEY: Master the Game, and it made me so angry that people were getting robbed blind. So I brought in America’s Best 401(k) and asked them to asses the 401(k) plan in my own research company. They showed me that we were paying 276% more than we needed to for the same exact stocks! It saved my employees $5 million in their retirement, and it cost nothing. I was so astounded that I partnered with America’s Best 401(k), and we created a fee checker that allows anyone to see how much they’re really paying in fees. To see how much you’re really paying, simply click over to America’s Best 401(k).