Where the will to innovate, disrupt and change the game really comes from Posted by: Tony Robbins

Have entrepreneurs lost the will to innovate? Sir Richard Branson doesn’t think so. He’s “never known a more exciting time for innovation,” and I agree 100%. We’ve got self-driving cars, miniaturized medical equipment and private space exploration. What will innovation bring us next?

For evidence that disruptive innovators can be spotted in every direction you turn, look no further than my friend and partner, Easton LaChappelle. Since the age of 14, Easton has dedicated himself to creating affordable, state-of-the-art, prosthetic limbs – IN HIS BEDROOM!! 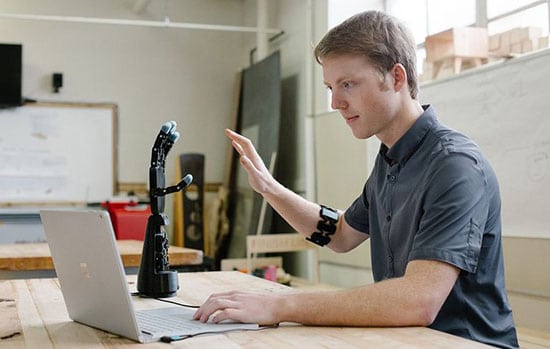 Want a storybook tale about an entrepreneur’s will to innovate? Once upon a time at a Colorado science fair, Easton met a little girl who was born without an arm. The girl’s parents told Easton about the elbow-to-fingertip prosthetic she was using that cost $80,000. Easton couldn’t believe that the 7-year-old would need several of these $80,000 arms as she grew.

Being a bright and ambitious innovator, young Easton had been tinkering with projects his whole life. In fact, he was there at the science fair presenting the first generation of a prosthetic arm that he had made out of a Nintendo Power Glove, Legos and electrical tape. But he had a moment of clarity in his meeting with that little girl and her family. He was moved in his heart to greatness.

Using 3D printing, Easton found a way to create a finger-tip-to-shoulder prosthetic with brainwave control for around $400! Yes, that’s not a typo. For about the same price as a PlayStation 4, you get an arm that is more powerful than the $80,000 model. A person using Easton’s first $400 arm can curl 300 pounds!

Easton was invited to the White House to meet with President Obama. I was completely inspired by Easton’s vision and even more so by his ability to execute. I had to connect with him. I reached out right away. When we got in contact I found out that he was a fan of my work — as I was his. We set up a partnership, Unlimited Tomorrow, in 2014. Driven to help people who can no longer walk, he began working diligently on building a carbon fiber exoskeletal suit. The goal was to eventually mass produce and custom-fit it to each person in need, effectively empowering a person with the ability to walk again.

Today the first version of the RoboArm design open-source via its website. That’s right: completely free. He’s continued to improve on his designs, winning accolades like a Popular Mechanics Breakthrough award in 2015. His affordable prostheses have continued to evolve: in a recent partnership with Microsoft he built a realistic arm for Momo, a nine-year-old girl. This arm’s fingers can withstand 10 lb of force per finger, move individually, give haptic feedback, and has AI capabilities that will continue to grow. Its cost would be around $5000, though Easton hopes to bring that down even more.

In early 2018, a crowdfunding campaign exceeded its initial funding goal and the money launched a pilot program to make 100 arms for 100 individuals in need, as Easton’s company works to scale and refine the manufacturing process. Now Unlimited Tomorrow has teamed up with Stratasys and Dassault Systèmes to produce the next generation of artificial limbs; I can’t wait to see what happens next.

In the decade to come, many things we currently think of as miracles will become commonplace occurrences because of innovative disruptors. And I really believe their motive does matter. Yes, Easton stands as a gifted entrepreneur to potentially do very well for himself financially, but the driving force behind what makes him do what he does is his honest desire to change lives — that’s what ushers him to remarkable breakthroughs faster than any other incentive ever will.

Most people’s hearts are in the right place, it’s just that they get so caught up in making a living and forget they can design a life. Still there is absolutely no question that the disruptor spirit is alive and kicking harder than ever in the world we live in today. There are tools of creation now at our fingertips that have never existed before.

As the old proverb goes, necessity is the mother of invention. When we have a deep enough need for something, history shows that a thought leader will be inspired to find a way to serve that need.

When an individual’s vision is aligned with insatiable hunger and a persistence that will not tolerate failure, miracles occur.

Fortunately, Easton LaChappelle is not the only one stirred to serve. The great innovators all have one thing in common: They know why they want to do something and that understanding allows them to stay out of the barbs and limits of the current how. Innovative entrepreneurs let the Why take hold of them and in doing so, they find the How, or they create it with their own hands.

As Megan Smith, former Chief Technology Officer of the United States, said, “I am a card-carrying optimist and I think innovation is alive and well.” I couldn’t agree with her more. I would declare that there is no reason to question the state of innovation.

What I would ask you as a disruptor today is:

What’s a set of reasons that will get you through the inevitable challenges that face any innovator? How do you “connect the unconnected” as Jim Grubb, Cisco’s VP of Emerging Technologies, put it.

And lastly, I ask this:

How do we as innovators collectively shift the conversation from, “Can it be done?” to “How do I make this happen right now?”

I’ve always said that passion is the genesis of genius. Go disrupt the limitations, and do it with passion.