The teenage phenomenon who is disrupting the prosthetics industry, and more Posted by: Team Tony 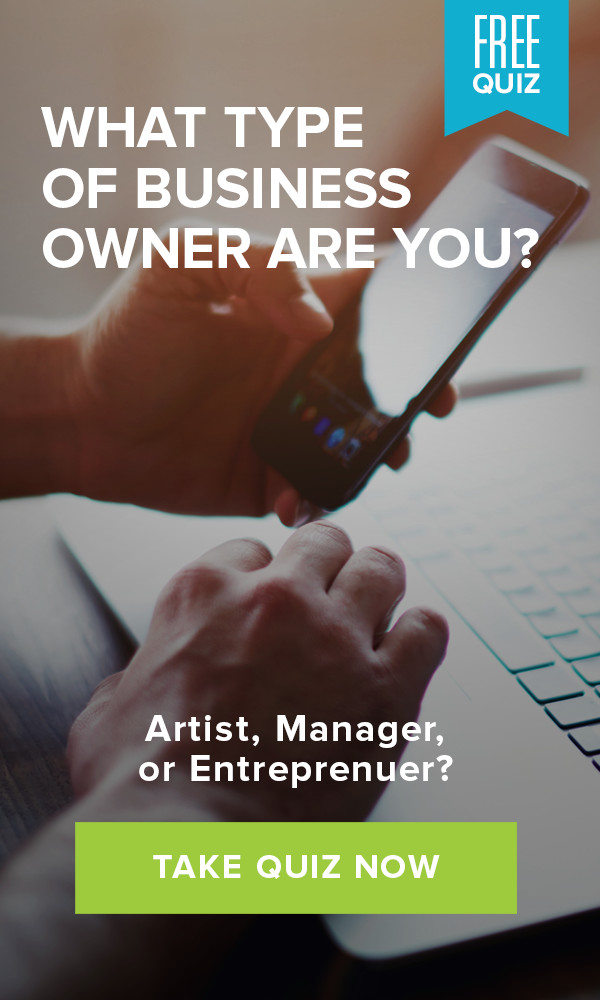 Easton LaChappelle knows a thing or two about taking the road less traveled.

In his early teenage years, while most kids were focusing on school and their social life, Easton LaChappelle was poring over the Internet, teaching himself the basics of robotics.

By the age of 14, he had made his first robotic hand out of LEGOs, fishing wire and electrical tubing. And through gradual improvements on the initial design, the ambitious teen was eventually able to turn the robotic hand into a robotic arm, now known as the RoboArm.

But it wasn’t just any robotic arm; it was an advanced, 3D-printed innovation that could be operated with the mind.

After a chance meeting with a 7-year old girl whose prosthetic arm cost a staggering $80,000, Easton was inspired to turn his robotic prototype into a practical and affordable device that, he hoped, would present a viable option for the handicapped. What he designed was not only a fraction of the cost of a traditional prosthesis, but was also lighter, more functional and stronger.

The design brought him to the White House, where he used the robotic prosthetic to shake hands with Obama, and also led him to work at NASA as a member of the Robonaut project, which investigated how astronauts on earth control robots in space.

Easton was offered a number of college scholarships and invitations to direct projects at universities around the world, yet he chose to stay in his hometown of Mancos, Colorado, where he has built his own robotics business, Unlimited Tomorrow, Inc.

Earlier this year, he launched a successful GoFundMe campaign that would allow him to expand his prosthetics business to buy more 3D printers, raw materials, testing equipment and manpower, all with the intent of getting the technology to the people who really need it.

And, to ensure he delivers on that point, Easton has shared the designs online, allowing everyone to have access to the technology. Making his designs open-source is part of his effort to introduce a wider range of people to engineering and to allow larger companies with more resources bring the product to market quicker to help the people who need it most.

I recently caught up with the wunderkind who had just returned from an around-the-world trip to Austria’s “Pioneers Festival” and Australia, where he was the keynote speaker for “ThoughtWorks Live.” After exchanging a few pleasantries, we delved into some more serious topics: 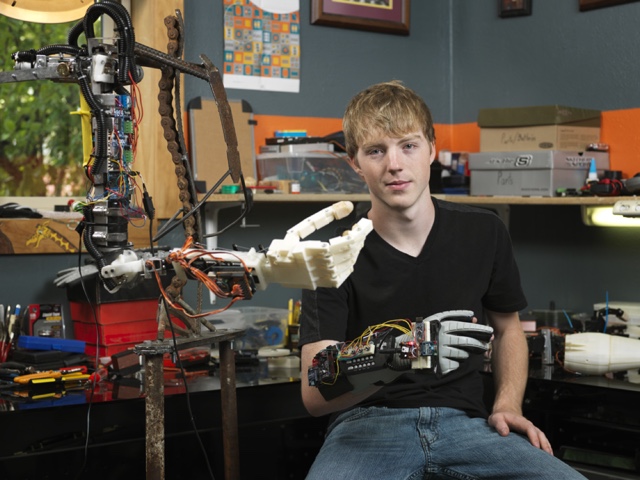 EL: Thanks. Yeah, we’re in about 3,000 square feet now. We have about nine 3D printers in the facility, and we have a big 4th-Axis CNC to produce final pieces that have metal, so we have additive and subtractive manufacturing underneath the same roof. The new facility is great because everything is now separated. We started in a garage and now we aren’t milling right next to the electronics.. The new space really increases our efficiency and capabilities, not to mention we finally have windows in the new facility.

KS: It seems like 3D printing has really enabled you to make big strides in the prosthetics industry.

EL: 3D printing allows us to produce something extremely customized for a fraction of the cost. That’s really the key, especially within prosthetics — that it is customized to each individual. The customization process is where the root of the cost is with traditional prosthetics.

It also changes our design philosophy. Because it’s printed layer-by-layer, we can have very complex internal structures and essentially fit more into a smaller package. And I think we’re just starting to really see the forefront of 3D printing. It’s literally changing the world, impacting everything from automotive devices to medicine.

KS: And you’ve made your designs open-source, meaning that anyone can download them from your website and, essentially, print them at home?

EL: Exactly. You can go on to our website, download the files, and print the parts on your own 3D printer. It’s just like downloading a PDF and printing it on office printers; literally, it’s that simple. We design our prototypes on consumer-level machines because anyone printing at home will have a similar machine, so we optimized the design in that respect.

By making our designs open-source, we are able to get it to the people who need it right away. With a global open-source community of makers, we now have a worldwide development team. People are taking our designs, improving on them, and using them for different applications.

We’re even in the process of converting the RoboArm into an educational tool for STEM (science, technology, engineering, and math) teaching. The design has the ability to be used in an elementary setting, or up to a university level as a kind of robotic physical platform. We are currently looking for institutions who would like to beta test our current RoboArm to help develop a curriculum and relevant projects to bring educational value to different disciplines.

And, because we made the design modular, all the joints can interchange. This means you can create something that has 20 movements to do whatever you imagine. If you want an arm to have four elbows, you can do that.

We’re trying to make it as open as possible. At the end of the day, it’s all about creating a sense of mass innovation, where everything is growing so quickly and new possibilities and opportunities are opening up everywhere.

KS: On your website, you say that you’re working on an exoskeleton to help paraplegics walk again. How did you come up with this idea, and how is it going?

EL: In 2013, I gave a TEDx talk in which I mentioned this young man I was going to school with. I spoke about how he had become paralyzed after a car accident and that my goal was to create a piece of technology to help him walk again.

At this point, we actually have a new concept for the exoskeleton, where instead of a big, bulky structure that would fit around the body, this would able to fit underneath someone’s clothes. I think this is key to the psychological aspect of the user. We’ve filed for patents on that, but right now what’s holding us back from hitting the market are the medical regulations. The exoskeleton is something that requires FDA approval as a medical device. We are hopeful that within the future, we’ll be able to fully develop the exoskeleton and enter the medical market.

KS: What’s your hope for the future of the prosthetics industry?

EL: Right now, the prosthetics industry is one of the few industries that hasn’t really changed in any significant way over the past 30 years. The industry run by about two or three very large companies which saturate the global market. Our technology, designs and new business models have given us an opportunity to really disrupt the industry and force some change. We would love to see some of these larger companies realize the potential of our designs and the future that our technology has within prosthetics. We open our doors to any collaborative efforts from these companies.

My goal is not to put them out of business, but to really improve the available technology and most importantly, help the people who really need it. We want to introduce new opportunities for more technologically sound and financially affordable options, and I think that we are on the right path to doing so.

KS: Are there any other projects you are working on right now?

EL: As a company, we’re developing a new intuitive control system where we essentially can read more human-like movements and translate that into something that’s meaningful. We believe our controller is the key to unlocking the full potential of existing robotic platforms and increase the efficiency of numerous devices.

A really great example, actually, is bomb defusing. The military uses bomb-disposal, or explosive ordinance disposal (EOD) robots to defuse bombs. They have to control the arms of the robot using joysticks which only allow for a few joints of simultaneous movement. But with a better control system, instead of moving a joystick, we can translate the movement of the user into something that’s is easily translatable to the robot. For example, if I move my elbow, and that would cause the robotic arm to move its corresponding elbow in the same fashion.

KS: This type of technology could also be useful in other industries.

EL: As a company, we will offer the product as well as a service to integrate it into existing platforms. This would also present a number of opportunities to increase efficiency and functionality in everything from heavy machinery, mining operations, automation or even large assembly lines.

KS: On a final note, how has your life, or your perspective on life changed over the past several years?

EL:  I believe technology can offer tremendous benefits, but it also comes with its drawbacks. I think the cell phone is always a good example. When I travel and as I look around in an airport, almost 95% of people are staring at some form of screen. That’s like the downside of technology — it can make us less engaging. But I also have seen the life-changing, game-changing power of technology.

Over the past several years, I have developed a deeper respect for technology than I ever had before. Technology has allowed me to make an impact on people’s lives, and possibly an impact on the world, and for me, helping change someone’s life, no matter if it is one person or thousands of people, has been my ultimate vision.

There are so many more opportunities to create change for the better in this world, and I’m just excited to keep striving to make that happen. Because the more we all contribute and the more we all create, our visions for something greater align and become more powerful, and that’s when something really special can happen.