Is social media #1 for fundraising?

From ALS to Movember, social media is changing the nonprofit world Posted by: Team Tony

Social media has become an increasingly important platform for charities and non-profits. Not only does it expand the reach of the campaign itself, but it helps drive conversation and inspire action within various communities around the world.

But not all fundraising campaigns seem to get it right. For every one that skyrockets to success, there are thousands more that never seem to get off the ground. We’ve all heard of the ALS Ice Bucket Challenge for example, but what about the “Doubtfire Face for Suicide Prevention” campaign, in which supporters are asked to take a cream pie to the face as a tribute to Robin Williams’s performance in the film “Mrs. Doubtfire?” Both campaigns were for a good cause, but one went viral, becoming a social phenomenon, while the other flew under the radar.

What makes the difference? Why are some fundraising campaigns more effective than others?

It boils down to several factors:

◆    First and foremost, the mission must be worthwhile. It must resonate with the audience and be something that they can truly relate to, or at least understand.
◆    The campaign must also be original. Novelty scores a lot of points when it comes to mainstream culture. Social media is so saturated with copycats and imitations, that anything new and original is your best shot at capturing the audience’s attention off the bat.
◆    The campaign will also have a better chance at going viral if it is highly customizable. By letting participants express themselves uniquely, and put their own personal spin on the message, a campaign will be able to engage the audience in a more intimate way as it essentially becomes a vehicle for personal expression.
◆    Of course, timing is important as well.
◆    There is always something to be said about celebrity involvement.

It may seem like it takes the perfect storm for a social campaign to take off. And while that is rare, it’s also very real. When a campaign gets it right, there’s no telling where it will end.

Here are four non-profit fundraising campaigns whose strategic use of social media helped them explode onto the scene:

A few years ago, the ice bucket challenge took over social media. From Facebook to Instagram to YouTube and Twitter, videos of people dousing themselves with buckets of ice water and challenging their friends to do the same dominated every feed and every channel.

The social media-powered video campaign was part of an online effort to raise awareness and money to fight against one of the most debilitating diseases in the world: amyotrophic lateral sclerosis, also known as ALS or Lou Gehrig’s disease. The challenge entailed participants pouring a bucket of ice water over themselves while recording it, posting the video through a social media platform, then daring others to either do the same or donate $100 to the ALS Association.

The timing of the challenge couldn’t have been better, with the warm summer weather making it fun to participate. It was also easy for men, women and children of all ages and abilities to take the challenge with its simple rules, low cost and overall accessibility. But perhaps most importantly, the challenge provided a community that connected and rallied people around a good cause while still allowing each individual room for personal expression in how the challenge was completed.

The fact that the challenge attracted a number of celebrities didn’t hurt either. Martha Stewart, Mark Zuckerberg, Oprah, Bill Gates, Jeff Bezos, Steven Spielberg and George W. Bush were just a few of the big names who participated in the challenge, helping make the challenge a philanthropic blockbuster:

In the end, more than 17 million videos were uploaded on social media platforms, and YouTube reported more than one billion related views. The viral campaign raised nearly $115 million for the ALS Association — a 3,500% increase from the $2.8 million that the organization raised during the same time period last year.

In 2004, it was hard to go anywhere without seeing someone donning a bright yellow wristband with the phrase “Live Strong” on it. The ubiquitous yellow bracelets, associated with the Livestrong Foundation (formerly known as the Lance Armstrong Foundation), had become an international phenomenon, helping the organization raise nearly $100 million to provide support to those with cancer, and proving to be one of the most effective merchandising campaigns in history.

The idea to use the silicone gel wristbands to raise awareness and funds for the fight against cancer actually started with Nike, who had already been making them for basketball players as something fashionable yet safe to wear on the court. Nike approached the Livestrong Foundation and offered to make 5 million wristbands, emblazon them with the words “Live Strong.” Nike also suggested the wristbands be made in yellow, the color of Lance Armstrong’s jersey. 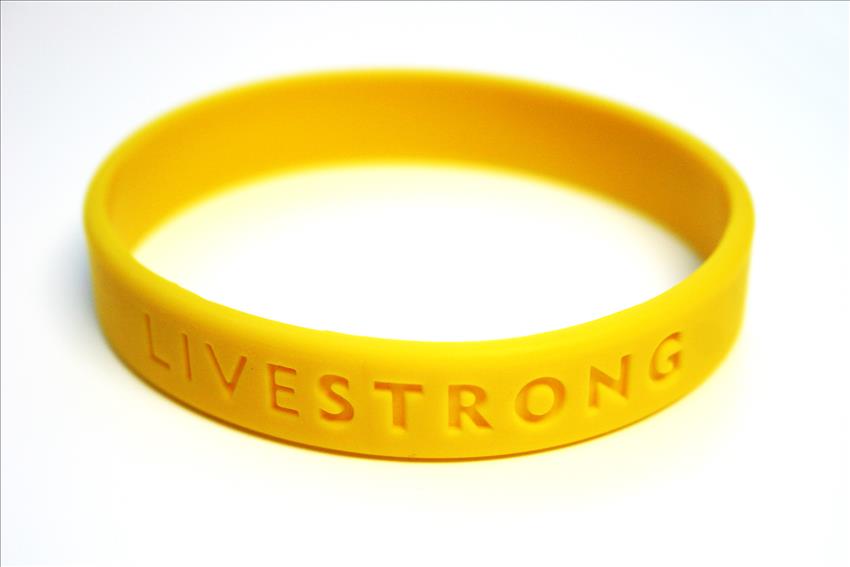 The timing worked out perfectly. Armstrong wore the wristband throughout the 2004 Tour de France, where he became a six-time Tour champion, and a number of Nike athletes sported them at the 2004 Olympic Summer games in Athens, Greece. Then John Kerry, a prostate cancer survivor, wore one during the presidential campaign. The publicity couldn’t have been greater, or more organic for that matter. Before long, the wristbands were being sold across all 50 states and in more than 60 countries. And in just one year, they had raised $50 million.

During this time, social media was also finding its way into mainstream culture, and the Livestrong Foundation began to leverage Facebook, Twitter and Youtube to propagate its message and reach a broader audience.

Social media allowed Livestrong to keep the wristband momentum going strong. By providing cancer patients and survivors an online platform to tell their stories and find a new community, Livestrong was able to build an entirely new realm of relationships that enhanced the significance of the yellow wristbands even more.

The wristbands, it seemed, were an easy way to show your affiliation with the organization. And the fact that they were inexpensive to make and buy meant that everyone — men, women and children — could afford to be part of the community. The wristbands also had a brand identity of their own, where people could use the wristbands in a social context to show others something about who they were and what they care about. They had become such a trend in mainstream culture, and particularly visible in social media, that other organizations eventually followed suit, and developed bracelets of their own with proceeds going to various causes.

After the Lance Armstrong doping scandal, Nike parted ways with the Livestrong organization, but what they had accomplished during their nine-year partnership was astounding. Together, Nike and Livestrong helped raise more than $100 million and turned the organization’s yellow wristband into an iconic symbol for the fight against cancer. The power of social media helped Livestrong emerge as a global brand, providing the perfect platform to continue raising money, spreading awareness and making an impact well into the future.

Every November, things get a little fuzzier, as men across the world ditch their razors and grow mustaches to raise money and awareness for men’s health issues — specifically prostate and testicular cancer.  The mustache madness is known as Movember, and since starting as a small, local fundraiser in Australia in 2004, it has grown into a global tradition and has raised nearly $600 million to fund 832 men’s health programs in 21 countries.

According to the Movember Foundation, “Movember was born from recognition that a fun and engaging initiative could help encourage men to become more actively involved in their own health. Movember aims to increase awareness and support for men’s health by getting conversations started at a grassroots level, educating men about the health risks they face, and raising vital funds for support programs.”

And it works, particularly due to social media. Since “photographic evidence” is half of the fun of Movember, Facebook, Instagram and even Twitter would be inundated with images of men and their bushy, wiry and sometimes patchy attempts at growing facial hair. This only helped accelerate the rate at which people learned about and decided to participate in the charitable campaign.

Many cite the competition and camaraderie of Movember as the main reason they got involved. Some focus more on the message and mission behind the campaign. Others do it simply because it’s a trend. In fact, the trend has become so popular on social media, that parody videos began popping up, like this one by Nick Offerman who happily doles out his mustache-growing advice:

So perhaps the takeaway here is to not be afraid to put a little fun and jest into fundraising. The cause may be serious, but the campaign doesn’t have to be. The Movember movement works because it’s fun, it’s engaging, it’s easy to do, and perhaps most importantly, it fits right into mainstream social media trends.

In 2008, Proposition 8 was passed in the state of California, amending the constitution to ban same-sex marriage. The proposition sparked a wave of protest and initiative within the LGBT community, with a number of new political and protest groups rallying together in opposition of what many deemed a violation of civil rights. One of the most prominent campaigns to come out of this groundswell was the NOH8 campaign.

The NOH8 Campaign was a photographic silent protest created by celebrity photographer Adam Bouska and his partner Jeff Parshley. The photographs featured subjects with “NOH8” painted on one cheek and duct tape covering their mouths, symbolizing their voice being silenced away by Prop 8, or “Prop H8” as it came to be called. At first, it was just everyday people of all ages and races who posed for the photographs. But it wasn’t long before the images flooded social media, becoming a trend that many were eager to adopt. Some photographers and student organizations even began setting up their own photoshoots replicating the NOH8 shots.

The campaign really gained traction when a number of celebrities began participating in the photoshoots. Larry King, Meghan McCain, Idina Menzel, the Kardashians, and Dr.Drew were just a handful of public personalities who shared their NOH8 photos via their social media platforms, drawing more attention to the cause and ultimately, helping and the campaign grow from a local California effort against Prop 8 to a national movement. 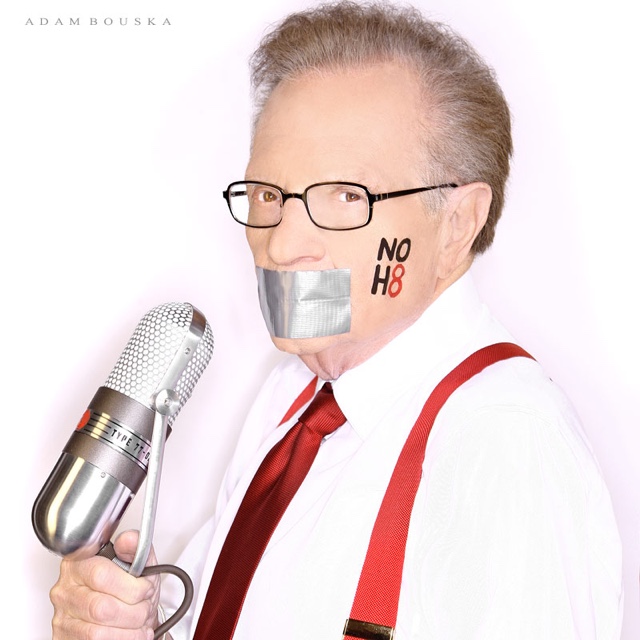 Even though Proposition 8 was eventually ruled unconstitutional by a federal court in 2010, the NOH8 campaign has continued to expand. Most recently, the NOH8 campaign has shifted its mission “to stand against discrimination and bullying of all kinds. The message of ‘No Hate’ can be interpreted and applied broadly, and speaks to each person in their own way.”