The #1 eco enterprise of the future 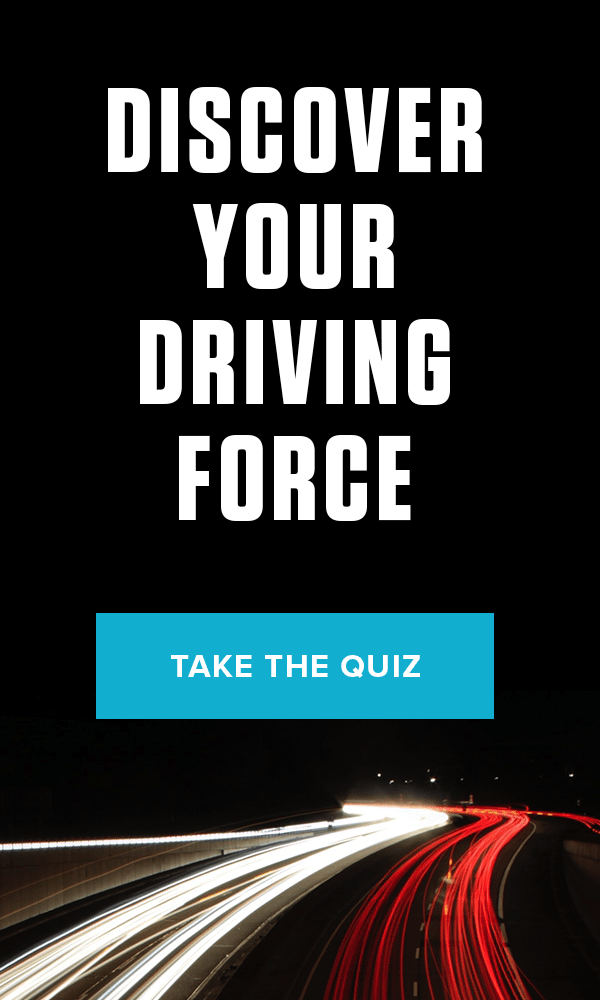 Whose job is it to “save the planet” — is it the government’s responsibility? Consumer activists? Non-profits?

What if it’s none of these? What if it was possible for businesses to do it, by combining social and environmental responsibility with their own business objectives, and achieving their goals while still having a positive impact on the world?

As an example, think about the recent demand for and advent of solar energy.

We’re all familiar with solar panels that are installed in places like rooftops, where they are readily exposed to sunlight. But have you ever considered solar panels being used on other open spaces, like parking lots, streets or even interstates? The potential for generating more energy and more economic opportunity would be massive — that, at least, is what engineering couple Scott and Julie Brusaw are banking on.

Husband and wife team Scott and Julie Brusaw are the creators of a company called Solar Roadways, and have been working on turning parking lots, streets and yes, even interstates, into power-generating surfaces for the past decade.

The idea for “solar roadways” dates back to the early 2000’s, when the phrase “global warming” was beginning to pick up even more steam. Concerned by what she was learning about CO2 emissions, Julie Brusaw pitched the idea of replacing asphalt and concrete surfaces with solar panels that could be driven upon to her husband, Scott, an electrical engineer.

The concept was straightforward enough: solar panels collect the sun’s energy, turn the sunlight into electricity, feed the grid and, in turn, feed the nation. If these solar panels could be used to replace the estimated 28,000 square miles of asphalt and concrete surfaces exposed to the sun, Scott and Julie theorized, they could produce 3X more power than we use as a nation, which would eliminate the need for coal-fired power plants and lower all electricity bills, and open up a new realm of employment opportunities and entrepreneurial offshoots.

Granted, the idea was grand, but it was also plausible. Aside from the top surface of the solar panels — a tempered glass that would be perfected by materials experts — the technology required for the panels already existed. In addition to the underlying social panel technology, the solar roadways implement a standard heating element in the surface to prevent snow or ice from accumulating in colder climates.

Each panel also contains LED lights that could light up in any configuration. These lights are used to “paint” the road lines from beneath, lighting up the streets for safer night time driving, indicating parking spots, and even signaling danger ahead. To have LED lights, the panels are equipped with a microprocessor board to control them. A microprocessor is just like a computer that can communicate, which means that the panels could talk to each other, so that if one breaks, the others can report it. A technician, then, could simply come out and swap the panel out for a new one and take the broken panel back for repair. Compare that to the arduous process of pothole repair, and then throw in the number of employment opportunities the roadways would open up not only for electrical engineers and solar panel technicians repairmen, but for businesses that fall within each of the industries associated with the roadways’ technology. 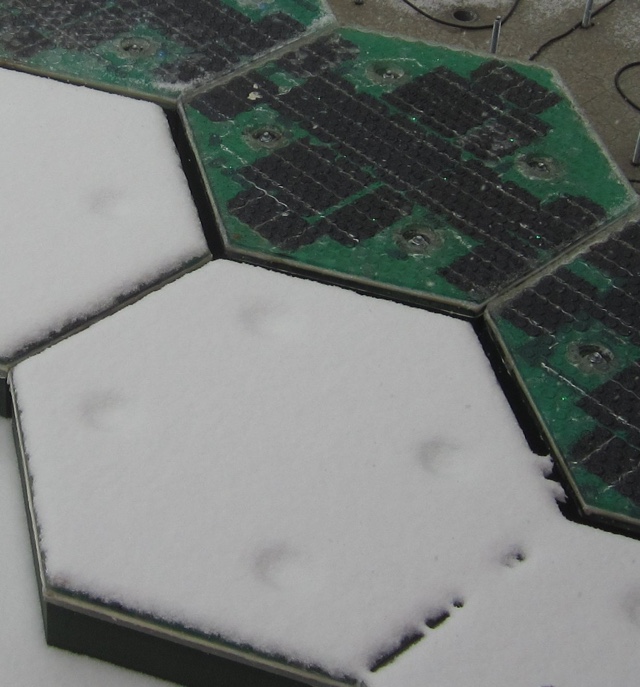 Other benefits of the solar roadway stem from the cable corridor that the Brusaws designed to sit just below the road’s shoulder and follow the roadway. One vault in the corridor would be able to collect stormwater, which accounts for more than 50% of the pollution in our nation’s water. Rainwater that runs through lawns, picking up pesticides or fertilizers, then goes out onto the road, picking up oil or antifreeze typically goes to the nearest body of water. But the corridor would be a way to treat the water or filter it right on the spot. The vault could also potentially be lined with a series of pumps and check valves that move the water where it is needed — to pumps, agricultural sites, or even better filtration areas.

On the other side of the corridor is the power and data vault. In addition to housing power cables, the corridor could be an ideal place to run fiber optic cables, which would enable high speed internet access at all points. Leaky cables could be put in as well to get rid of cell towers, so that no matter where you find yourself, you have cellphone reception.

Solar roadways would also create a better infrastructure for electric cars. Not only would the solar panels provide an easy platform for static charging (plugging in), they would make dynamic charging a possibility. Dynamic charging occurs when the car is able to charge while it is moving. Some companies have already started creating mutual induction devices in anticipation of dynamic charging becoming the norm. 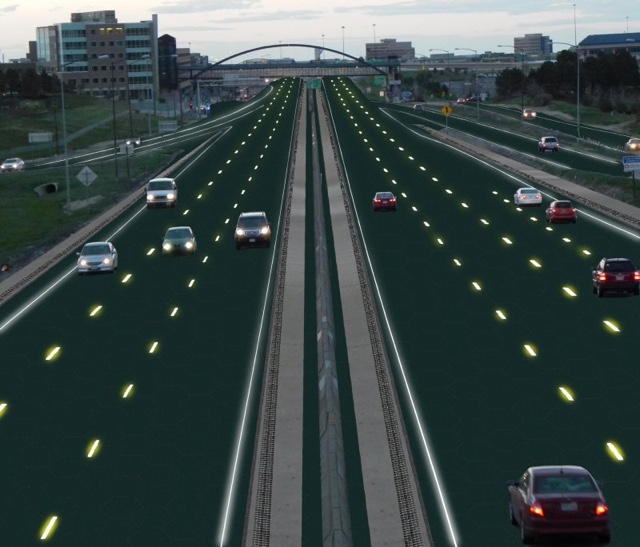  An artist’s rendition of an interstate with solar panels
Image ©www.solarroadways.com

To take it the environmental impact one step further, Scott found a way to mix waste with organic matter to create the internal support structure of the solar panels. As the oceans and landfills are filling up with plastic trash bags, water bottles, tires and so much more, this would create a new type of recycling program that would help address a significant amount of our nation’s waste.

Granted, the initial cost of solar panels is one of critics first points of contention. But asphalt roads are petroleum-based, and are becoming increasingly more expensive to build and to maintain. Solar roadways, on the other hand, will pay for themselves over their lifespan by generating electricity.

Covering roads, or even sidewalks and parking lots, with solar panels could also help rebuild the nation’s crumbling infrastructure, creating a number of government jobs and new opportunities for economic enterprise. And as Scott sees it, as solar roadways become the new norm, businesses will retrofit their parking lots with solar panels and people will exchange their internal combustion engines for practical all-electric vehicles, using less coal for energy and less oil for their cars. Potentially, we would be able to wean ourselves off of fossil fuels. 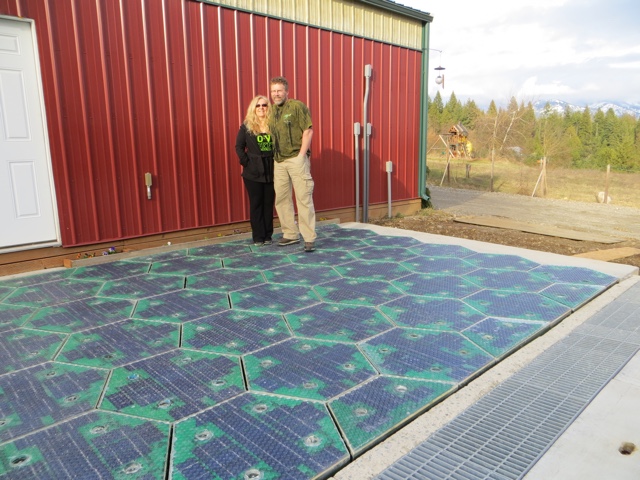 So far, Solar Roadways has attracted the attention of the U.S. Department of Transportation, which awarded the Brusaws two contracts to develop solar road panels that were safe enough for fast-moving vehicles, strong enough to support the weight of constant traffic and able to generate constant power. Scott and Julie have also raised more than $2 million from a crowd-funding campaign, which allowed them to purchase a building and hire employees to start manufacturing the solar panels.

While there is a lot more testing to be done before these solar roadways become a reality, the potential is there. Solar roadways could very well become our national power grid, providing a viable solution to rising energy costs and global warming, and an entirely new realm of economic opportunity for both businesses and consumers.

Social and environmental issues, such as the rising costs of energy and the perils of climate change, have created an entirely new competitive landscape, where companies like Solar Roadways are questioning existing models, exploring alternatives to the current norms, finding new ways of meeting consumers’ needs and ultimately, creating a more sustainable economic model that also happens to create social and environmental good.

The world’s most pressing issues require radical innovation to be solved. Whether that means innovations in technology or new methods of organization and processes, the bottom line is that there is a new focus on how to meet the emerging norms. And as there is not any one straightforward solution, for-profit enterprises, as well as inspired individuals, are finding ways to act entrepreneurially to change the existing paradigms in a way that benefits the planet and the economy.