Soccer icon Abby Wambach on leadership, failure and forging your own path Posted by: Team Tony

What do you do when it’s time to leave everything you’ve ever known? How do you retire from something that has been your identity for decades? These are questions that every athlete must eventually face – and many struggle with depression and anxiety after retirement.

Humans are innately social. The support that our “wolfpack” provides is invaluable, and sports are the ultimate pack: You train together. You eat together. You experience the highs of winning and the lows of failures together. It’s no wonder so many athletes feel lost and alone after retirement.

Abby Wambach certainly did. Yes – even the illustrious and internationally renowned G.O.A.T. of American soccer struggled with retirement. She had to learn how to recreate her wolfpack and feel that sense of belonging once again.

In this episode, Abby discusses her new book, WOLFPACK: How to Come Together, Unleash Our Power, and Change the Game, in which she outlines the eight new rules of leadership. Abby is interviewed by Tony’s right arm, creative partner and former ESPN writer, Mary Buckheit, who has covered Abby’s career through the decades.

Who is Abby Wambach?

Hailing from Rochester, NY, Abby Wambach is an iconic striker, two-time U.S. Soccer Olympic gold medalist, FIFA World Cup champion and long-time captain of the U.S. National Team. She was the United States’ leading scorer in the 2007 and 2011 Women’s World Cup tournaments and the 2004 and 2012 Olympics. (She missed Beijing 2008 due to a broken leg.)

Leading the charge for the Red, White and Blue for some 15 years, Abby has made plays alongside the great Mia Hamm, Alex Morgan and everyone in between. Wambach led the USWNT to victory in the 2015 World Cup just before announcing her retirement from the sport of soccer. She is STILL the highest all-time leading scorer in international soccer history, with more goals (184) than any other player in the game, male or female.

Since retiring, she has written two books and spends her time making the rounds on stages and podiums sharing her secrets to success at colleges and universities, corporate events and culture conferences. No wonder Time magazine named her one of the 100 most influential people in the world and there’s an official Barbie doll made in her likeness.

During her time playing soccer, Abby was celebrated around the world not only for her talents, but also for her patented style of leadership and resilience. Her teammates have called her legendary, inspiring, unbelievable and a tremendous champion. Where does the incredible leadership ability come from? Her ability to make failure into fuel. Abby says: “Always find a way to turn failure into something that’s going to serve you or serve the world.”

After her retirement, Abby faced her greatest challenge of all. She was depressed, numbing her feelings with alcohol and prescription drugs. Eventually, she faced a choice: Continue to spiral downwards, or turn her despair and fear into action. She decided to keep pushing forward. She accepted that life happens for you, not to you. She even began to see the worst thing that ever happened to her – her DWI – as the best thing, because she never would have met her wife without it.

Create your own path

Part of Abby’s journey was digging into her limiting beliefs. She began to question the messages she had been given and the way that her beliefs had been shaped. She says, “We have to figure out where we are and what we believe now, and draw lines back to how we came to believe some of these things.” Then we can create a new blueprint for our lives that will bring fulfillment and happiness. 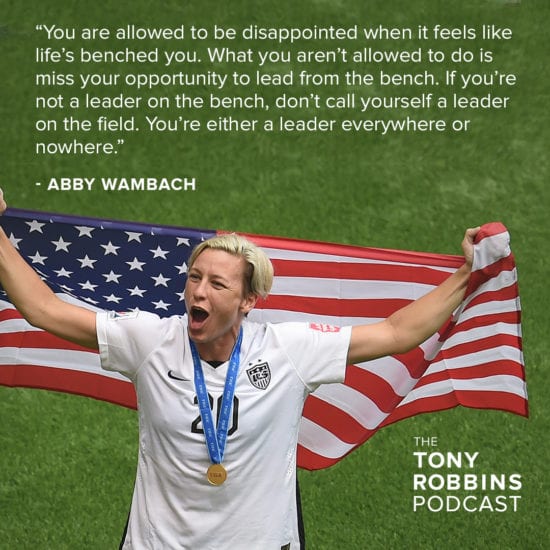 Everyone experiences struggles in life – even soccer icons like Abby Wambach. We all must learn to discipline our disappointment and keep pushing forward, no matter what. We must drop our egos, unravel our beliefs and change our stories. As Abby says in the podcast, “Throw away old stories and write your own story. It’s possible.”