Home » Perfect is the enemy of good

Perfect is the enemy of good

Uri Levine is not name you’d recognize, but something he invented is probably an app on your phone. He co-founded Waze, the world’s largest traffic and navigation app. More than 250 million drivers worldwide use it, and the company was acquired by Google in 2013 for 1.1 billion dollars.

Since then, Uri has founded several other companies, like FeeX, a startup that reveals hidden fees you might not be aware of from your bank, and Engie, an app that can diagnose car problems so you can arrive prepared at the mechanic. He’s also creating innovative solutions to major problems in the US, like the cost of healthcare, and public transportation. And don’t worry, he’s still obsessed with solving the traffic problem.

Uri’s mission in business is nothing short of brilliant: to disrupt inefficient markets, and to solve BIG problems that save consumers time and money, while also empowering them with information. In other words, he’s creating real products for real people, that solve real big problems.

In this episode, Uri shares some of his key learnings from the Waze startup journey; from starting from scratch to a successful exit. You’ll hear the processes that he applies when he starts up or advises any company – like figuring out product-market fit, whether the problem he’s trying to solve is actually a problem in the eyes of consumers, and his strategy behind hiring a winning founding team. He also talks about something that is difficult for every business owner – when it’s time to let people go.

You’re also going to hear how Uri allocates his time, as a founder and serial entrepreneur, in each phase of the startup process, in order to properly support his team, while also making best use of his own time.

Uri is interviewed on stage by Scott Harris, a coach, mentor and a speaker at many of Tony’s events, including Business Mastery, Tony’s signature business event. 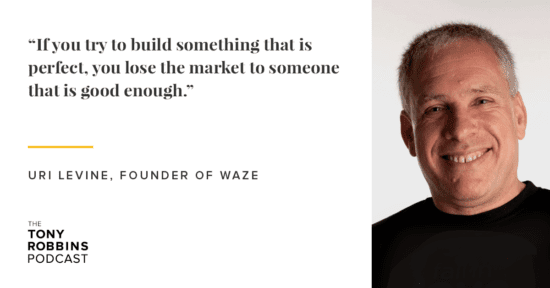 From Now to Next

How businesses are pivoting now