How the NFL quarterback conquered his fears and found a greater purpose Posted by: Team Tony

What’s standing in your way of achieving your goals, your dreams? What is holding you back from taking that next step forward? For many of us, it’s fear: fear of failure, fear of the unknown. We become our own worst enemy, doubting ourselves into paralysis.

In this episode of the Tony Robbins Podcast, you will hear a very special conversation between Tony and Eagles quarterback Nick Foles. Nick reveals his constant battles with self-doubt and fear of failure. In fact, it was this fear that almost kept him out of the NFL entirely. But through his faith and his family, Nick found a greater sense of purpose and strength that have helped him keep going – and he’s even adopted an entirely new perspective when it comes to fear.

Who is Nick Foles?

Nick Foles is an NFL quarterback who was drafted into the Philadelphia Eagles in 2012. Since then, he has played for the St. Louis Rams, Kansas City Chiefs and Jacksonville Jaguars, and currently plays for the Chicago Bears. He won the 2018 Super Bowl with the Eagles and was named Super Bowl MVP that year. He holds the highest career passing rating for the Eagles franchise, among other NFL records.

This interview happened after Nick helped lead the Eagles to their Super Bowl Championship in 2018. Nick was the backup quarterback, but after starter Carson Wentz was injured, he got his chance to shine – and he made the most of it. It’s clear that Nick has the talent and the mindset to be successful in life. But what you’ll hear in this podcast is that even in spite of his incredible accomplishments, Nick’s sense of past failures and mistakes is never too far from his mind.

Nick describes a dark moment when he nearly lost his love of the game while playing for St. Louis. He’d endured heavy criticism regarding his playing, and his wife was quite ill; he considered leaving the sport entirely.

He faced an additional problem: the daily opinions of millions of people who had plenty of thoughts about what he “should” have done or “should” do in the future. When the average person fails, not many people hear about it. When Nick failed, it quickly made national news. Everywhere he turned, he was bombarded by his own mistakes.

Others’ negative opinions quickly turned into negative self-talk. He began to internalize his emotions and the obstacles he faced began to seem insurmountable. Yet like a true champion, Nick managed to turn those obstacles into opportunities.

Nick took to journaling to help him clear his mind and slow things down. He realized fear was a recurring topic in his writing, and that fear had seeped into the way he felt about himself and the sport. Nick felt the weight of all those expectations and opinions, and began wondering whether he was worthy of the team and the game: “Fear starts creeping in. Can I do this? Will I let the city down?” He realized that fear had begun shaping the way he thought about himself.

Nick is a firm believer that if he hadn’t experienced failure and pain in his past, he wouldn’t be where he is today. And along his journey, he’s seen how immensely important it is to be open, honest and transparent about your weaknesses. Because by acknowledging your limiting beliefs, you free yourself and can grow into the person you were meant to be.

“People don’t want to talk about fear because they think they’re weak,” he adds. “But you have to be able to address your fear to conquer it.”

Nick’s career nearly ended after St. Louis. He texted a beloved mentor informing him that he no longer wanted to play. He returned from a fly fishing trip to messages from several different teams. He sat down with his wife, Tori, and prayed for guidance, but did not receive a nudge in one direction or another.

Nick realized the lack of an answer was just the answer he needed. God was telling him to choose his own path: Play, or don’t.

He knew it was fear that kept him from playing. He knew he still had the ability to play, but the fear was pushing him toward the bench. To conquer his fear, he needed to face it and let it drive him.

He decided to use his fear before it used him. He got back on the field and back into the game he loved, and he’s never looked back.

Staying in the moment

Nick’s journey has brought him to a beautiful state. No longer paralyzed by fear, he’s finding joy in his day-to-day life as a husband, father and teammate. He feels he’s accomplishing more than he ever has. He’s able to be a blessing upon others. He has discovered the gift of presence – the ability to enjoy every moment without worrying about the past or the future.

Nick says, “I don’t know what the future holds, and I’m not going to worry about that. I’m going to do everything I can right now to be the best person I can be.” That’s a lesson we can all take to heart. 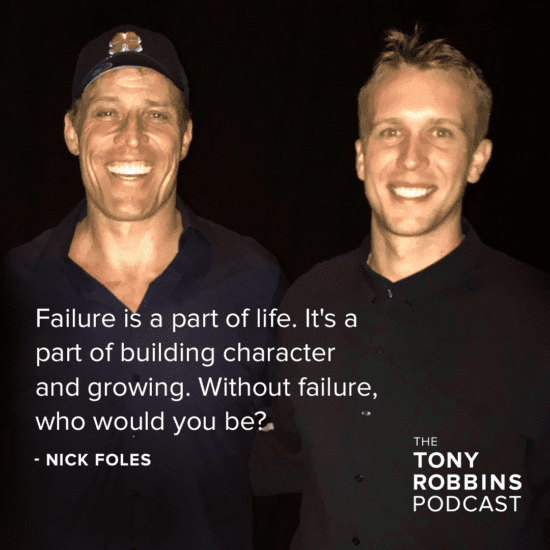 Imagine what your life could look like if you were able to find a reason that was so much bigger than yourself to propel you forward. Imagine what would happen if you found a reason that was beyond money or material objects – a reason that supported a greater purpose. Imagine having a resounding and unflagging faith that you will be rewarded when you go after your goals with everything you have. That’s the faith that Nick Foles found, and you can also shift your perspective to find peace and beauty in the present moment.