Shape the extraordinary life you deserve at Date with Destiny

How to turn fear into power

Nick Ekbatani faced his greatest fear at Date With Destiny

“Life is found in the dance between your deepest desire and your greatest fear.” 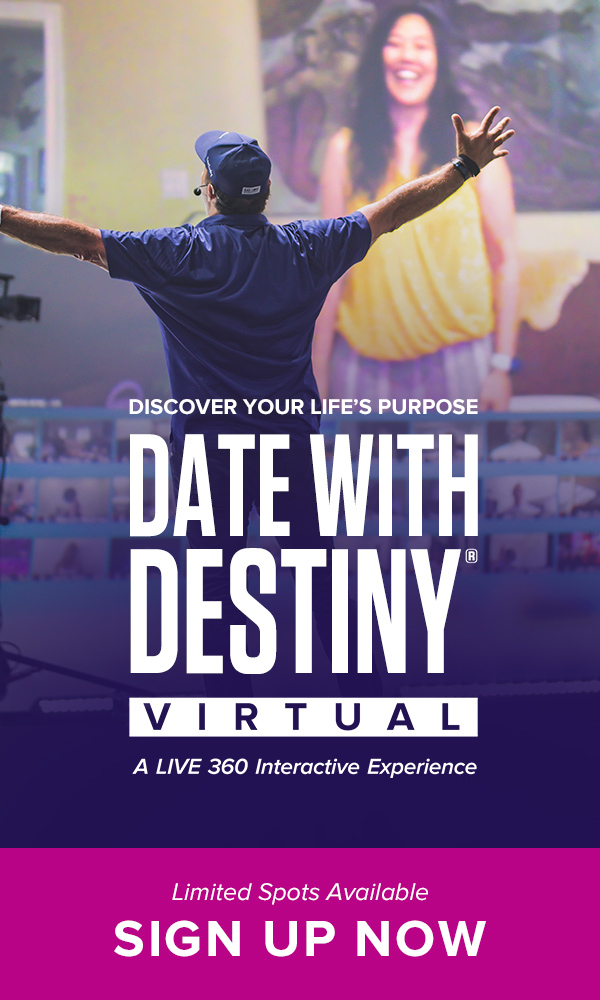 We all have fears. Living an extraordinary life means turning that fear into power.

Amir “Nick” Ekbatani learned this first-hand at Date With Destiny. Just out of college and working at ESPN, Nick was in a motorcycle accident that changed his life forever. His left leg was amputated below the knee and he endured multiple surgeries.

Nick was determined to bounce back. A former football player, he worked hard to rebuild his skills in sports. He completed an MBA and became a personal trainer, as well as an actor and model.

But something still wasn’t right. Nick was feeling unfulfilled in life and relationships. Although on the surface he had rebuilt his life, he had never truly learned how to turn fear into power.

At Date With Destiny, Nick realized he needed to be radically honest with himself. He knew something had to change – he just didn’t know what. Tony says “Every thought and emotion is controlled by two things: your beliefs and your values.” Turning fear into power begins with those two things.

Your beliefs shape your world. What you believe about yourself, others and the events around you have the power to create a life of joy and fulfillment – or of pain and anger. Examining your limiting beliefs is an essential part of Date With Destiny. You can then replace them with empowering beliefs and change your story.

Your values are related to your deepest needs. We all have six human needs, but we prioritize them differently. Your top need – your greatest value – drives every decision you make. Nick likely discovered that his top need was love and connection. That’s why his greatest fear was abandonment.

The good news about beliefs is that you can choose to change them whenever you want. Date With Destiny focuses on one phrase: “I am 100% responsible for my experience of life.” When you take responsibility, you’ll feel empowered to live the life you’ve always wanted. You’ll be free.

Nick realized that the pain he felt due to abandonment was a choice – one that was keeping him from reaching his full potential. He realized that events themselves are not positive or negative – only the emotions we attach to them are. He ascribed negative feelings to events from his past, and that caused him to fear the future.

He realized that, instead, he could turn fear into power. He discovered a new confidence: “I don’t need to win people over to keep them around. I’m rad, and I don’t need to try to impress everybody. It’s a simple epiphany to have, but it blew my mind.”

Step three: Be open to change

Change can be scary. Many people go through life never making changes, never growing or chasing their dreams. Never bothering to turn their fear into power. It’s more comfortable that way – and certainty is one of the six human needs. But growth is addictive. You just need to take that first leap.

At Date With Destiny, Tony says, “Life is so much kinder than the stories we tell ourselves.” Nick needed to realize this before he could be open to others. Once he did, his whole world opened up. He began to experience the event as a place to connect with others and offer his own gifts.

Nick says, “What Date With Destiny has meant to me has been to just open up. Let people in. It’s very liberating to go out there with the intention to just give.” Nick not only discovered his true self – he learned to love himself.

Date With Destiny allowed Nick to face his fears head on. He was able to let his personality shine. He saw that he had so much to give. He found common ground with people from all walks of life. He even did an incantation on stage during the event.

For Nick, turning fear into power was about opening up to others, and there’s no better place to start than Date With Destiny. For others, overcoming fear might mean public speaking, starting a new career or finally being vulnerable in a relationship. No matter your fear, you must face it head on.

In the end, Nick says, “I’m leaving this event with a lot of lessons, a lot of knowledge, a lot of growth and a lot of new friends.” That’s the ultimate way to turn fear into power.

Shape the extraordinary life you deserve at Date with Destiny

Ready to commit to your destiny?