The triumphs and setbacks of the greatest American swimmer Posted by: Team Tony

Having won 28 medals, Michael Phelps is the most decorated Olympian in history. He has trained and competed at the highest levels of elite swimming, has broken world records and forged an unrivaled career. After he announced his retirement in 2012, he made a valiant comeback in 2016 at the Rio de Janeiro Olympics, where he won five more gold medals to bring him up to a remarkable 23 first-place finishes.

In this Peak Performance podcast, you’ll hear from this legendary athlete as he and Tony have a one-on-one interview at Tony’s private home, as part of a small event held for his Platinum Partners. Michael will share with the group how he became the greatest American swimmer of all time – and the setbacks he faced along the way. You’ll also hear a little bit from snowboarder Shaun White, who was also there toward the end. (You can hear Shaun’s full interview right here on the podcast).

Origins of a great American swimmer

Michael trained and competed in the swimming pool for much of his life. Michael grew up seeing his sister compete at a high level, and her victories helped shape Michael’s desire to compete. His mom signed him up as a kid, but he really took to the sport at 11 years old, when he started swimming with his long-time coach, Bob Bowman.

We wouldn’t be talking about Michael Phelps’ medals – or Michael Phelps at all – without the support and belief of Bob. In many ways, Bob helped grow Michael into the Olympian he is today. When Michael turned 11, Bob told him, “You can make the Olympic team in four years.”

Michael, deeply aware of his sister’s success and wanting to emulate her and carve his own path in the pool, said to himself, “This is what I want. I want to be an Olympian.” He knew that his first decision was focus – and on the basis of his coach’s words, he dropped out of his other sports and focused entirely on swimming.

The body and the mind

A good coach doesn’t just train your body. They also learn how your mind works so they can craft strategies that will help you reach your goals. For Michael, this meant an intense training regimen (10 workouts a week) and spending the bulk of the day in each other’s company.

Bob understood Michael’s natural competitiveness and drive to do better. After placing fifth in his first Olympics, Michael knew he wanted to do much, much better four years later. Where did that drive come from? As Tony says in the podcast, “Lots of people want things in life, but not all people get them.” The difference is in your mindset.

After his lackluster finish, Michael was upset – even angry with himself. He didn’t want to take a break. He wanted to work even harder. He wanted a medal. More than a medal, he wanted to do something no one else had ever done in the sport. Or as he powerfully put it, “I don’t want to be the second Mark Spitz, I want to be the first Michael Phelps.”

Bob knew what to do. He wrote “WR” on their new training plan. “We’re going to get a world record,” Bob said. “In six months.” With that very clear goal to visualize and work toward, the two of them got to work. 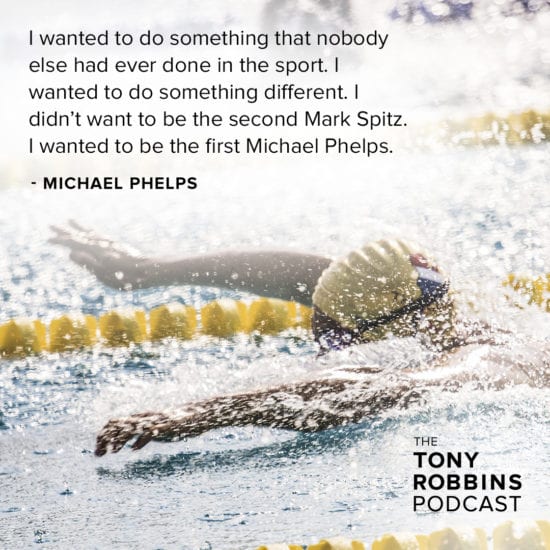 Stepping back from other promising avenues is a risk many young athletes and entrepreneurs are not entirely prepared to take. Why close yourself off from other potential success if this venture fails? But Michael trusted Bob to guide him. At 11, Michael was searching for someone to show confidence in him and in his abilities.

You can’t get much more confident than declaring someone’s Olympic potential and giving them a timeline to reach it. As Michael grew, Bob’s confidence in him never wavered. They occasionally needed to improve their communication, but their trust was steadfast – and that made all the difference.

Touted as one of the greatest coach-athlete partnerships in the history of swimming, Michael opens up to Tony about his unbreakable relationship with Bob, who not only molded him into a supreme athlete, but who also played an essential role in his emotional upbringing.

As the saying goes, the higher they rise, the harder they fall. Not everything for Michael Phelps has been paved with gold, and his rise to the top was not without a series of well-publicized stumbles. He was twice suspended from the USA Swimming organization for drug- and alcohol-related violations. Yet he took full responsibility for his actions, admitting that he let a lot of people down and committing to personal growth.

In this interview, he opens up about his struggle with depression, which affects over 40 million people in the U.S. and takes a particular toll on Olympic athletes, who are on a biochemical high during the games and return home feeling empty and directionless. He admitted he contemplated suicide after the 2012 Olympics. But if anyone knows how to turn obstacles into opportunities, it’s Michael Phelps.

After achieving so much so early in life, Michael needed to shift his mindset. He needed to understand that life was happening for him – and that it’s all about the journey. Now, Michael’s life is far different from what it once was. He’s a husband and father of two boys. He’s more patient. He spends time writing. He’s rekindling a relationship with his father.

Most of all, he’s learning that true fulfillment comes from growth – and that growth doesn’t have to be in swimming. He’s been with his wife Nicole for 11 years, and they’ve been through everything together, both privately and publicly. Michael has found his new purpose in life: learning how to help each other and grow together, raising their children and giving back to the community. 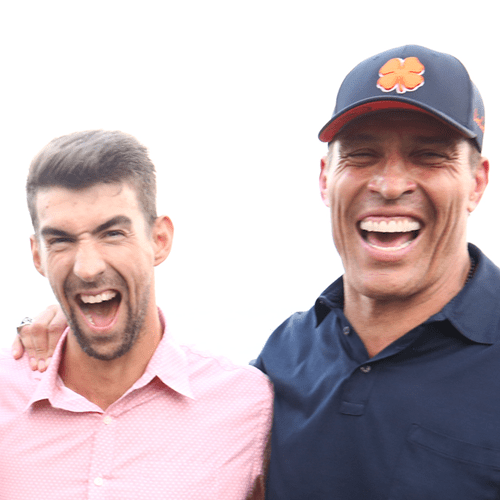 Michael isn’t planning on another Olympic comeback – instead, he’s using his platform to help save lives through the Michael Phelps Foundation and his commitment to water safety and mental health programs and awareness. And as he shares with Tony, to him, that’s a comeback even bigger than winning an Olympic gold medal.