If you’ve eaten out in New York City the past couple of decades, chances are, a restaurateur named Danny Meyer has had an impact on how your meal went.

As founder and CEO of Union Square Hospitality Group, Danny Meyer has grown his empire to include some of New York’s most beloved and acclaimed restaurants and cafes, including Gramercy Tavern, The Modern, and Blue Smoke. Together, Danny’s restaurants and team have won an unprecedented 28 James Beard Awards – the food industry’s highest honor.

But it’s not just great food that sets Danny’s restaurants apart from the rest. It’s what people experience and feel when they’re eating there. In fact, Danny Meyer’s story is a remarkable testament to the sheer power of hospitality.

Hospitality is something that can make or break any business, regardless of industry – and, it’s not just how you treat your customers or clients. According to Danny, hospitality begins with how you treat your employees – an unconventional wisdom considering the “put the client first” mentality that most businesses, understandably, adopt.

In this episode, we explore the unique and celebrated culture of hospitality that Danny has created. He shares with Tony how he’s managed to scale that culture across Union Square Hospitality Group – as well as Shake Shack – the fast-casual restaurant he founded in 2001. With Danny at the helm, what started as a single hot dog cart in Madison Square Garden is now a publicly traded company with half a billion dollars in annual revenue, over 200 locations, and 6,000 employees.

Danny also shares the six qualities he looks for when hiring employees – from bussers to executive chefs – and what he thinks it takes for entrepreneurs across all industries to succeed in business. 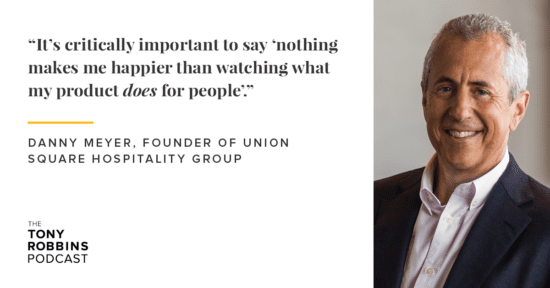 “For those of us who make a living by nourishing and nurturing guests in our restaurants, there’s a logical connection to feeding people in our community who don’t have enough.” – Danny Meyer

Danny Meyer is committed to extending caring hospitality beyond the walls of his restaurants and into the communities that they serve – and is committed to making the world a better place. He focuses giving at Union Square Hospitality Group in the areas of hunger relief, child nutrition, and community development and beautification – and supports important community partners like No Kid Hungry and City Harvest food rescue. To learn more about the difference that Union Square Hospitality Group is making in their community, go here.

What Walt Disney Can Teach Us About Leadership

Save your relationship from stress

How to create raving fans